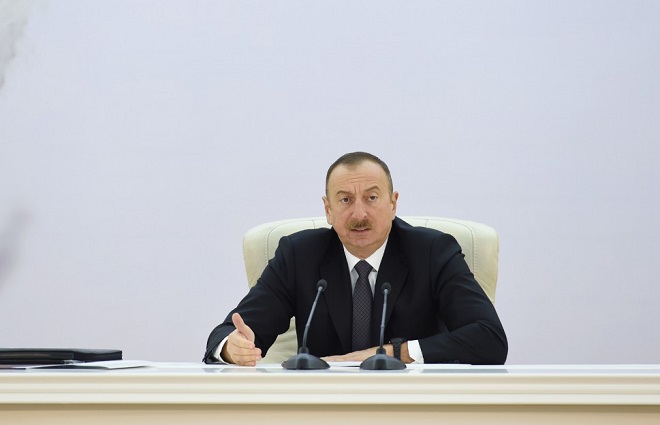 "The view from President Ilham Aliyev’s fifth-floor office is spectacular, yet at the same time highlights the dangers facing America’s most trusted ally in the broader Middle East. To the north lies Russia, a country governed by a man who has no hesitation in using energy exports as a political weapon. To the south lies the Islamic Republic of Iran, another state actor whose regime threatens closure of the straits of Hormuz, the chokepoint for 20 percent of the world’s oil.

The United States is lucky to have Mr. Aliyev in charge of this Muslim nation of 9 million because, unlike Vladimir Putin and Ayatollah Ali Khamenei, the president of Azerbaijan does not play politics with energy exports. This 56-year-old leader understands that if families in Ukraine do not get gas deliveries to their homes in the winter they may perish, or if Europe’s gas is cut off for a few days in the summer perishable goods across the continent will be destroyed. In short, within the broader Middle East, Azerbaijan has proven to be the most reliable partner for and anchor of Western energy security.

Beyond the offshore oil platforms one sees from President Aliyev’s office is the project that needs Washington’s immediate and full support: TANAP, or the Trans-Anatolian gas pipeline. Starting from the giant Shah Daniz gas field operated by British Petroleum, this project means the delivery of 355 billion cubic feet of natural gas to Europe by 2020. The geopolitical implications of TANAP are clear: Azerbaijan becomes a reliable long-term energy exporter to Europe, thus lessening the continent’s reliance on Russia and its unreliable leaders who have shown no hesitation in using gas exports as a political weapon to extract concessions from the West.

Even though one does not see Israel or the Vatican from the president’s fifth-floor office, one can spot a synagogue and a church in the center of the city. Religious tolerance is a fundamental aspect of Azeri life and runs very deep in the DNA of this secular Shiite nation. While it is true that Azerbaijan needs to do more when it comes to protecting the rights of individual bloggers and journalists, the fundamental human right of practicing one’s faith freely is well established in Azerbaijan. For example, while members of the Bahai community are free to practice their faith in Azerbaijan, they are harassed, persecuted and killed in neighboring Iran. As such, the United States can point to Azerbaijan as a model for other Muslim counties to emulate when it comes to protecting the fundamental human right of religious liberty.

A byproduct of Azerbaijan’s religiously tolerant society is cultural tourism. On the plane ride from Qatar to Azerbaijan, I asked my fellow passengers from the Persian Gulf States why they were choosing to visit Azerbaijan and not Lebanon, Istanbul or Dubai. The unanimous answer was that Azerbaijan in general, and the capital city Baku in particular, is safe (Istanbul has become dangerous), clean (garbage collection in Beirut is intermittent), tolerant (men and woman are free to intermingle) and cheap (Dubai is now far too expensive). It would not be a surprise to see an American entertainment brand like a Warner Brothers or Universal Studios setting up a theme park in Azerbaijan in the next few years because 200 million people live within a two-hour radius of Azerbaijan.

Immediately after the attacks of Sept. 11 on American soil, the former President of Azerbaijan, Heydar Aliyev, invited American Ambassador Ross Wilson to his office and offered the full support of his country. That legacy of U.S.-Azerbaijan cooperation to combat global terrorism is carried on by his son, Ilham Aliyev. Today, the American Air Force has unhindered flyover rights over Azerbaijan’s airspace, thus allowing the Pentagon’s Transportation Command to supply goods and services to American troops in a timely manner. A critical but lesser-known fact about this aspect of military cooperation between Washington and Baku is that when injured American servicemen in need of urgent lifesaving care need to be flown to an American military hospital, they are flown over Azerbaijan’s territory.

While he cannot see the territories occupied by Armenian forces (with significant support from Moscow) from his office in Baku, the president of Azerbaijan is determined to solve this frozen conflict by peaceful means. Unlike Palestinian leaders who teach hatred toward their Jewish “occupiers,” Mr. Aliyev does not advocate hatred toward those who occupy 20 percent of his country. In fact, Mr. Aliyev’s desire to solve the Nagorno-Karabakh conflict peacefully is an opening for the Trump administration to work with Moscow and bring peace to the region that would benefit both Armenia and Azerbaijan.

When President Trump looks outside his office at 1600 Pennsylvania Avenue, he cannot see Azerbaijan, but what he should appreciate and support is the fact that miles away, an American ally exists that deserves America’s praise. President Trump may want to show his appreciation by inviting President Aliyev to the White House, where they can both write a new chapter in America’s relations with one of its most reliable allies in the broader Middle East".