Baby with DNA of three parents 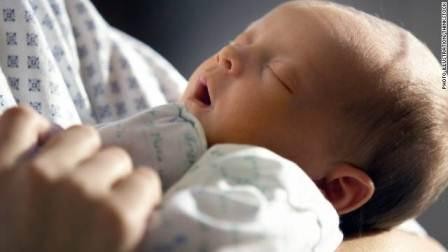 Not everyone is rejoicing following the birth of a seemingly healthy three-parent baby earlier this year, which is detailed in study published in a scientific journal Tuesday. The baby boy was born on April 6 in Mexico, having been conceived using a technique called spindle nuclear transfer.

As reported in the journal Fertility and Sterility, the use of this reproductive technology was intended to prevent Leigh syndrome, a severe neurological condition that affects at least one in 40,000 newborns.

The mother previously had four pregnancy losses and had given birth to two children, one who survived less than a year, another who lived only 6 years due to the syndrome. For religious reasons, the mother wanted to use a technique that would not require the destruction of fertilized eggs, which an approved treatment in the United Kingdom would require.

Led by Dr. John Zhang, founder of the New Hope Fertility Center in New York City, her doctors left the US, where the technique has not been approved by the Food and Drug Administration, and performed their work in Mexico, which is free of similar regulations.

Though billed by Zhang as a "first ever," a different version of this same technique had been used by fertility clinics in the past, explained Professor Hank Greely of Stanford University, who specializes in the ethical, legal and social implications of new biomedical technologies.

"About a dozen such babies were born in the US in the late 1990s/early 2000s before the FDA -- pushed, I think, by cloning concerns -- decided that this procedure needed FDA approval," said Greely, adding that the clinics who did this before have since stopped performing the procedure.

While in the past, the procedure was used to help women conceive and give birth to healthy babies in cases of infertility, the new version was created to tackle a specific problem: mitochondrial mutations.

Almost all the cells in our bodies have mitochondria. These "organelles" -- a mini-version of an organ within a cell -- perform as tiny batteries do, producing some much needed energy. What is unusual about mitochondria, though, is they carry 37 genes of their own and these are passed, intact, from mother to child through the egg.
A sperm also carries its own battery pack, but once it fuses with an egg to form an embryo, the masculine mitochondrion withers and dies.

No matter whether we are male or female, we inherit our mitochondrial DNA (or mtDNA) from our mothers, who inherited hers from her mother.

But sometimes a woman may be born with a mutation in her mitochondrial DNA. Though genetic defects may not cause negative health effects for her, they could cause a mild or severe disorder if passed on to a child, said Dr. Owen K. Davis, president of the American Society for Reproductive Medicine. Zhang's results will be presented at the society's annual conference next month.

"To have the full-blown disease, you have to have a high percentage of these mutated mitochondria and they can get worse with passage," said Davis.

In the current example, about a quarter of the mother's mitochondria were mutated while the babies she lost had over a 95% mutation load.

"A small amount of DNA is not necessarily going to cause a full-blown syndrome but it can in translation to the next generation these mutated DNA can selectively multiply so you end up with a preponderance of mitochondria that are abnormal and that's how it becomes a disease," said Davis.

The fix? Use another woman's mitochondrial DNA in order to get the load down to a really low level.
Essentially, then, Zhang and his colleagues sucked the mitochondria out of the mother's egg, inserted donor mitochondria in its place and then fertilized the egg.

"Transfer of the [normal] embryo resulted in an uneventful pregnancy with delivery of a healthy boy at 37 weeks of gestation," wrote Zhang and his co-authors in the published study.

Questions about the baby's future

Some experts questioned the procedure.

"It's unfortunate to have people decide they're just going to quite willingly engage in this kind of reproductive tourism -- to go outside of a system that is in place to create the safest, most scientifically reproducible way forward," said Lori P. Knowles, assistant professor, adjunct, at the University of Alberta School of Public Health. "That's the precedent then, that if you think you can do it, then let's just hop the border and see what happens, hope for the best."

Her view is supported by R. Alta Charo, a professor of law and bioethics at the University of Wisconsin at Madison. This technique, as Charo explained, has been closely examined by both the British regulatory authorities and the American National Academy of Medicine and National Academy of Sciences.

"It is regrettable that it is now occurring in countries that have not had similarly serious close looks at both the technical and ethical aspects," said Charo. "It's going to be difficult to use the results of this particular effort in the context of organized data collection," she said, "And that's a shame, that's a real loss of information not only to science but to every patient in the future who is considering this."

More importantly, though, she is concerned for the boy who is now 6 months old. "Follow-up is going to be important to look at the health of the child," said Charo.

"It's always wonderful that a baby has been born and born healthy... as far as we know," said Knowles. She is not alone in her skepticism for the future health of this baby. Tuesday, the Science Media Centre published the comments of 12 experts, many who reported similar reactions to the news.

"We know that the procedure is not perfect," said Dr. David J Clancy, lecturer, Lancaster University, who explained that in 2015, a published study showed "that tissue-specific expansion of mutated mitochondrial DNA during development can occur and so could cause disease if levels are high enough."

A healthy baby might eventually develop a disease, Clancy suggests.

Knowles also pointed out that four out of five eggs fertilized by Zhang and his colleagues were nonviable -- only one embryo could produce a child.

"It shows you the technique itself is still quite fallible," said Knowles, who noted that there's no guarantee the defective mutation might not accumulate within the baby boy and eventually lead to disease. "Which is the whole reason you're supposed to go slowly... and not jump right into creating babies."