A 3.7 billion-year-old fossil found, the oldest yet! 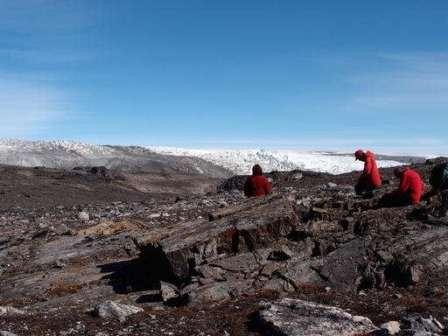 Scientists have found what they think is the oldest fossil on Earth; a remnant of life from 3.7 billion years ago when Earth's skies were orange and its oceans green.

In a newly melted part of Greenland, Australian scientists found the leftover structure from a community of microbes that lived on an ancient seafloor, according to a study published in the journal Nature. The researchers believe the structures in the rocks are stromatolites - layered formations, produced by the activity of microbes, that can be found today in extremely salty lagoons in a few locations around the world.

They made their find in July 2012 while doing field research in Isua, a region of Greenland so remote that they had to travel there by helicopter. The site is known for having some of the oldest rocks on Earth, in what is known as the Isua supracrustal belt.
The new fossils are 220 million years older than any previously discovered.

The discovery also raises questions about the possibility of life on other planets.

Scientists had thought it would take at least half a billion years for life to form after the molten Earth started to cool a bit, but the discovery shows life may have formed quicker and easier than once thought, about half a billion years after Earth formed. And that may also give hope for life forming elsewhere, such as Mars.

“If we have got life at 3,700 million (3.7 bn) years on Earth, did it exist on other planets - because Mars, for example, 3,700 million years ago was wet,” said Clark Friend, an independent researcher and co-author of the research.

Up until now, the oldest stromatolites scientists discovered have been from Western Australia and they are roughly 3,500 million (3.5bn) years old.