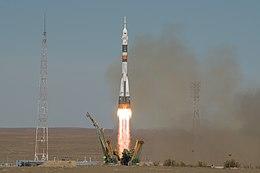 Crewmembers of a new expedition to the International Space Station (ISS) who are scheduled to head to the orbit onboard a Soyuz MS-11 spacecraft on Monday are absolutely confident in the reliability of the Soyuz-FG carrier rocket and their spaceship, Oleg Kononenko, a cosmonaut of Russia’s state space corporation Roscosmos and the ship’s commander, told a news conference on Sunday.

"Risk is part of our job," he said. "We have had a lot of training sessions to drill skills for various emergency situations, so, we understand that we can face them during our spaceflight. But we understand also that people who assemble the spaceship and the carrier rocket are doing their best to do their job properly and follow all technical documentation. They know that this spaceship and this rocket will carry people and we trust them absolutely," he said.

According to Kononenko, the crew is ready for the launch psychologically and technically.

The Soyuz-FG carrier rocket with the Soyuz MS-11 manned spacecraft will be launched from Baikonur at 14:31 Moscow time on December 3 to dock to the International Space Station at 20:36 Moscow time on the same day.

Initially, the flight had been scheduled for late December, but after the abortive launch of a Soyuz-FG carrier rocket in early October, the flight will be carried out 20 days earlier.

Soyuz-FG carrier rocket with a manned Soyuz MS-10 spacecraft blasted off from Kazakhstan’s Baikonur Cosmodrome to the International Space Station (ISS) on October 11. On board the spacecraft were Russian cosmonaut Alexei Ovchinin (the commander of the Soyuz MS-10) and NASA astronaut Nick Hague.

Following a smooth liftoff, the Soyuz’s booster malfunctioned between the first and second stages of separating, whereupon the crew was forced to abort the flight and switch to ballistic descent. The manned Soyuz MS-10 spacecraft ended up landing safely in the Kazakh steppe. The crew was not hurt. This was the first emergency situation with the launch of a manned spacecraft over the past 35 years.

The incident-probing commission announced on November 1 that the emergency situation occurred after "a nozzle cover on the oxidizer tank failed to open due to the deformation of the separation contact sensor."

The sensor was damaged during the assembly of the rocket’s first stage at the Baikonur Cosmodrome.