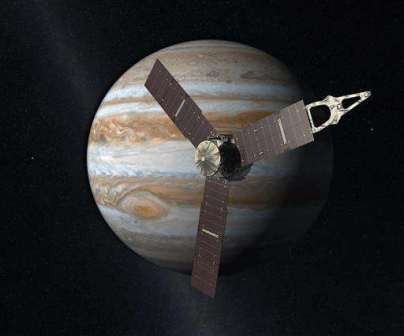 After traveling 1.8 billion miles over five years, NASA's Juno spacecraft has reached Jupiter. Juno is the first spacecraft in more than a decade to orbit the planet.

Ground controllers at the NASA Jet Propulsion Laboratory and Lockheed Martin erupted in applause when the solar-powered Juno spacecraft beamed home news that it was circling Jupiter's poles.

The arrival at Jupiter was dramatic. As Juno approached its target, it fired its rocket engine to slow itself down and gently slipped into orbit. Because of the communication time lag between Jupiter and Earth, Juno was on autopilot when it executed the tricky move.

"Juno sang to us and it was a song of perfection," JPL project manager Rick Nybakken said during a post-mission briefing.

The spacecraft's camera and other instruments were switched off for arrival, so there weren't any pictures at the moment it reached its destination.