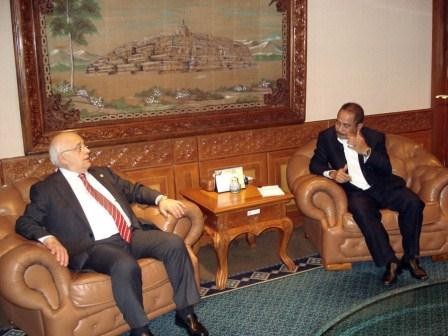 Azerbaijani Deputy Prime Minister Elchin Efendiyev has met with Vice-President of Indonesia Mohammad Hatta to discuss the ways of expanding relations between the two countries.

Efendiyev is in Jakarta to attend the 5th Extraordinary Summit of the Organization of Islamic Cooperation (OIC) on Palestine & Al-Quds Al-Sharif.

The Azerbaijani Deputy Premier praised relations between Azerbaijan and Indonesia and the two countries’ mutual support for each other on the international arena.

The Indonesian Vice President said he looked forward to President Ilham Aliyev’s visit to Indonesia, and recalled his visit to Azerbaijan in 2013 when he observed the presidential elections.

Hatta hailed Azerbaijan’s rapid development, and stressed the importance of expanding cooperation between the two countries.

During the visit Efendiyev also met with Indonesian Minister of Education and Culture Anies Baswedan. They noted the importance of enhancing and promoting cooperation between the two countries in cultural sphere.