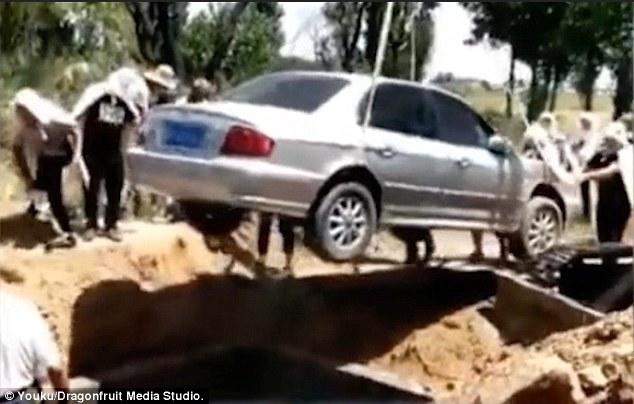 A car lover in northern China was granted his final wish when he was buried in a saloon after his death.

The man, identified by his surname Qi, died in his village in Baoding city in Hebei province on Monday.

He specified in his will that he wants to be laid to rest in a car instead of a traditional coffin, according to Kan Kan News.

Video footage of the bizarre service shows the silver saloon bearing the body of the man being slowly lowered into the grave by an excavator.

The grave was specifically dug to fit the saloon and was seen held in place securely with cement plates on the sides.

Mourners were seen paying their respects at the service and standing around to guide the car into its large grave. The car still had its license plate attached.

After the car-coffin was placed carefully into the grave, the excavator filled the hole with soil.

Being buried in a car implies what this man achieved while he was alive.