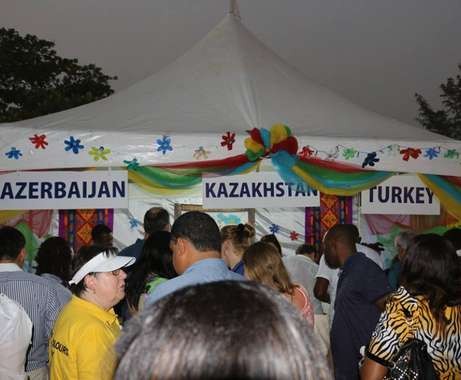 The only Azerbaijani national living in Nigeria, Billura Bayramova, has attended Small World charity event organized by the International Women's Organization for Charity in Lagos.

The Small World charity event saw international and national women’s groups living in Nigeria get together to showcase a feast of cuisine, costume, culture and color, bringing together people from all walks of life to celebrate their diversity. All funds raised through the event, sponsorship and advertising go directly to the nominated charities.

Small World was founded 19 years ago by a group of expatriate women who wanted to give back to their host country, Nigeria. They felt that by working together they would be able to raise more money for local Nigerian charities. And so, in 1996, the annual Small World event was born.

Starting as a small, indoor food fair with 300 guests, the event has grown to become an outdoor festival with over 3000 people attending.

In 2008, Small World was officially incorporated as the “International Women’s Organisation for Charity” with the Corporate Affairs Commission of Nigeria