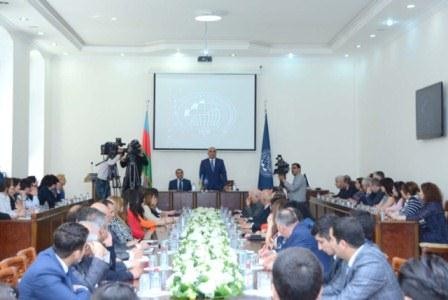 "Professors' Club" has been established by the Academic Board of Azerbaijan State University of Economics (UNEC). The main goal of founding the "Professors' Club" is to foster advanced ideas in modern society using intellectual potential of professors and doctors of sciences. The members of the club will be able to communicate in non- formal, active and meeting different tastes atmosphere during the relaxation period to share their knowledge, skills and life experiences.

The club established by the head of the Department of Finance and Financial Institutions, Dr. of economy Avaz Alakbarov's initiative undertakes the role of the union of domestic and overseas professors and doctors of sciences based on volunteerism and cooperation. To arrange meetings for exchanging views on the achievements of classic and modern sciences, to achieve the integration of club members to international scientific communities, to provide young scientists with comprehensive support and to be represented in different scientific, cultural and public events held in the republic and abroad are the directions of the club's performance.

According to the regulations, the presidium and the chairman are the governing bodies of the club. Also, membership is voluntary and every professor and doctor of sciences can join the club who is unanimous with the objectives set out.