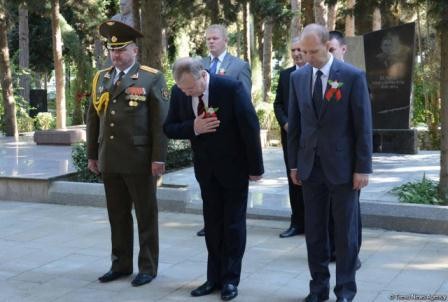 The Victory Day is the brightest holiday of the year, Gennady Ahramovich, Belarusian ambassador to Azerbaijan, told reporters in Baku.

He made the remarks May 9 during the ceremony of laying a wreath at the Memorial of Military Glory in Baku.

Ahramovich said that 71 years ago ended the most difficult war in the history of humanity that touched all the peoples of the former Soviet Union.

This holiday is uniting all peoples of the former Soviet Union, he added.

"I wish the veterans, who gave us a bright future, happiness, health and long life," said Ahramovich.

The ambassador added that he would not like to see such terrible wars in the history of mankind anymore and wants all conflicts to be solved peacefully.