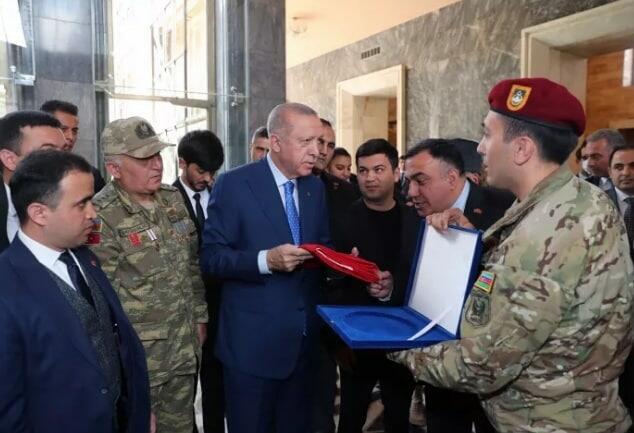 Reservist senior lieutenant of the Special Forces Shamsaddin Gurbanov, who was awarded 9 medals for his services in the Great Patriotic War, presented the Turkish flag he wore during the 44-day war to Recep Tayyip Erdogan.

Axar.az reports that these images of our wounded gas in Shusha were on the agenda on social networks.

It should be noted that Shamsaddin Gurbanov always carried the Azerbaijani flag during the war.

He said in an interview:

"As we entered Jabrayil, we came face to face with enemy artillery. At that time, a group of our high-ranking officers came under fire. I took the flag in my hand, threw it over my head and threw it at the enemy. Sniper bullets were falling on me. My comrades came after me. We destroyed the enemy there. We did not waste a single bullet. After that battle, that flag was torn. That flag is now a veteran with me. It is a flag of revenge. But at that time we had wounded and martyrs, and I, as a commander, took them out of the area. Therefore, I could not plant the flag in Shusha...”