Eyewitness accounts of the Khojaly tragedy… 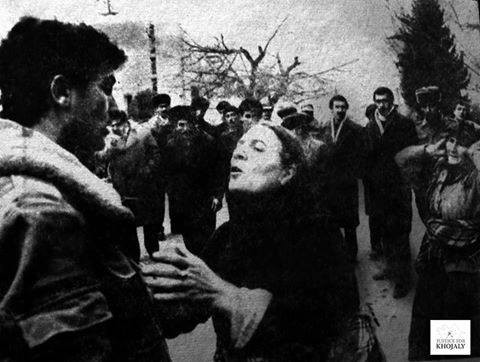 "The Khojaly genocide with its inconceivable cruelty and inhuman punitive methods was completely targeted against the people of Azerbaijan and represents a barbarian act in the history of humankind. At the same time, this genocide was a historical crime against humanity."

Khojaly genocide: through eyes of witnesses

“A tank and an APC [armoured personnel carrier] approached from the direction of Askeran; they opened fire on the residents. Armenian militants placed the corpses in a row and started cutting off ears, gouging out eyes, and went as far as burning some of them. They ripped open the stomachs of pregnant women, and tossed babies up into the trees. An Armenian cut off an ear and fired a bullet through the leg of my son-in-law, and then tied him to a tree. He was told to say that the land belonged to Armenians. When he refused, adding 'Motherland's not for sale!', they poured petrol over his legs and then set them on fire. Then they put out the fire and invited him once again to say that the land belonged to Armenians. But he refused again. Then they poured petrol all over him and burned him alive.”

""Before we came under fire, we picked up the corpse of a boy, missing a head. You could see the corpses of women, children and elderly people everywhere. They were all butchered."

"The foreign journalists in Aghdam, reported that among those killed women and children in Khojaly they saw three scalped, with the pulled off nails bodies. This is not the Azerbaijani propaganda, but a reality".

"Not far from the Armenian village of Nakhichevanik (close to Khojaly), I saw dozens of mutilated corpses. Those were peaceful residents of that Azerbaijani town (Khojaly) - children, women and elderly people shot at point-blank range"

"A body in military uniform was lying over there, a headless corpse. Most of the bodies had their heads, but those had been scalped. The breasts had been cut off one young girl’s body..."

"We have seen prisoners from Khojaly. Almost all of them were unfit for normal life. In cold weather they were kicked half-naked out into the street, doused with icy water, glass was smashed over their heads... An Armenian cut a baby’s body into two and began to beat his mother with one half. The mother, soaked in blood, suddenly started laughing ... She went mad...

"I saw with my own eyes, five shots from a tommy-gun tearing a baby's body apart in his mother’s arms. The baby’s mother was shot in the chest. My son, pregnant daughter in law, wife and 16-year-old daughter were killed before my eyes in a Khojaly street. A Meskhetian Turk and 11members of his family were imprisoned in their house, which was doused with benzene and set alight. Armenians beheaded Azerbaijanis, their fellow villagers in Mehdikend; a nearby river turned red with the blood. I was chained by my arms and legs to a wooden board into which nails had been hammered. I spent 48 days in captivity. When I was taken captive by the Armenians, I weighed 72 kg. By the time I was freed, I weighed just 28 kilogrammes. "