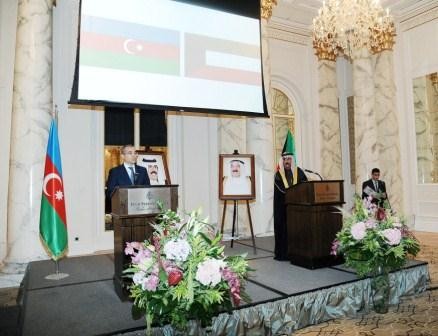 The Embassy of Kuwait in Baku has arranged an official reception to celebrate the 55th anniversary of the National Day.

Prior to the ceremony, the national anthems of the two countries were played.

Providing an insight into the development path of Kuwait, the Ambassador highlighted his country`s achievements in economic and cultural fields.

Expressing his satisfaction with the expansion of relations between Kuwait and Azerbaijan, the diplomat said that reciprocal visits and high-level meetings paved the way for the rapid development of bilateral relations.

On behalf of the Azerbaijani government, Minister of Education Mikayil Jabbarov congratulated the people of Kuwait on the occasion of the holiday. He said that relations between the two countries were successfully developing in a variety of fields.

Hailing the political relations between the two countries, the Minister said Kuwait is cooperating with Azerbaijan both in bilateral and international formats.