The martyred lieutenant colonel was commemorated - 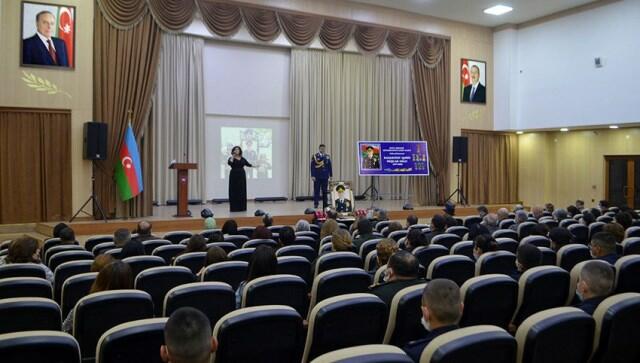 A commemoration ceremony of Lieutenant Colonel Garib Bakhshaliyev, the officer who died as Shehid in the Patriotic War, was held at the Military Lyceum named after Jamshid Nakhchivanski.

Axar.az reports citing MoD that at first, the memory of the national leader Heydar Aliyev and the Shehids (Martyrs) who died for the liberation of our lands was honoured with observing a minute of silence. The State Anthem of the Republic of Azerbaijan was performed.

Officers, cadets, and teachers of the lyceum, as well as the Shehid’s family members and comrades-in-arms, attended the event organized by the Army Ideological and Cultural Center named after Hazi Aslanov.

Memories of Lieutenant Colonel G. Bakhshaliyev, who had served at the Military Lyceum named after J.Nakhchivanski for a long time, and his allegiance to the Motherland, nation, and state were discussed at the commemoration ceremony. A photo exhibition reflecting various years of the life of our Shehid was demonstrated to the event participants.

At the end, singers of the Song and Dance Ensemble of the Army Ideological and Cultural Center named after Hazi Aslanov performed songs and marches praising heroism and patriotism.