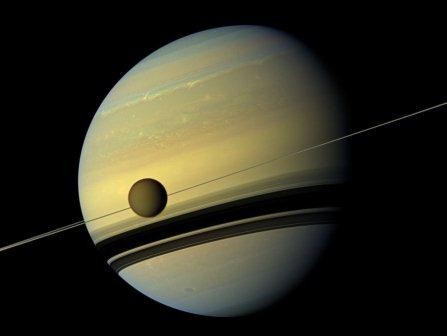 As humans explore space more deeply and thoroughly, we’re discovering that a lot of stuff out there is… sloshing, Sputnik International.

Dione, one of Saturn’s many moons, is the latest celestial body suspected of harboring a subsurface ocean of water. Data collected by NASA’s Cassini Saturn probe, and published online in Geophysical Research Letters this week, suggests that 62 miles below Dione’s crust is an ocean a few miles deep, submerging a rocky core.

Scientists found this hidden water when in 2014 they noticed Enceladus, another one of the ringed planet’s moons, wobbling as it spun. They also noticed that the moon had strange gravitational fluctuations – all of which could be explained by the presence of water, deep under the rocky cold surface. Then they found that the rock spits cold, massive geysers of water from its south pole, confirming the presence of water under its crust and raising speculations that conditions there could harbor life.

Now, it appears that Dione’s gravity has similar eccentricities, though less dramatic than those on Enceladus, as the new data shows that Enceladus’s ocean is much closer to the surface than Dione’s. But Dione may wobble as well, though the Cassini probe is not sensitive enough to detect it. Dione’s smashed-up surface suggests that it, too, may have a wild side, and that its underground water also escapes occasionally.

Researchers believe that Dione has had its ocean for its entire life as a moon. This means it has, and has had for a very long time, a zone in which microbes could live.

"The contact between the ocean and the rocky core is crucial," said Attilio Rivoldini, co-author of the study, on the website of the Royal Observatory of Belgium. "Rock-water interactions provide key nutrients and a source of energy, both being essential ingredients for life.

" Dione's ocean, deep beneath its surface, seems impossible to access for now, but with Enceladus and Jupiter's moon Europa shooting water into space, it is possible that samples could be collected by passing spacecraft.

With these study results, the list of ocean-worlds gets a little longer. Pluto has water; Jupiter’s moons Europa and Ganymede do, as do Saturn’s Dione, Titan and Enceladus.