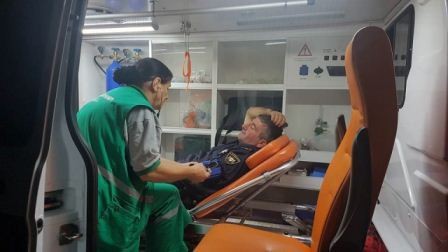 Special Forces riot police have been deployed to the south-central Georgian of Marneuli after violent clashes broke out late in the afternoon at a polling station between supporters of rival political parties vying for seats in the next parliament.

“I was told that they threw stones and beat each other with sticks. The scuffles left the polling station severely damaged, with windows and doors destroyed. The Ministry of Internal Affairs (MIA) informed us that a Special Forces riot unit and riot police would be mobilized and sent to the scene,” Imamkuliyev said.


The MIA later announced that the law enforcement units had been deployed to polling station 48, in the village of Kizilajlo, where the clashes took place.

The Ministry said several people, including local police officers, had been injured in the clashes but that the ballot boxes remained in the hands of the international election observers.

Unofficial sources claim the situation escalated when voters complained that they were blocked from submitting their ballots.


Dozens of men standing outside the polling station then tried to break into the building, which was guarded by local police officers.

Both the Georgian Dream and their bitter political rivals, the UNM accuse each other of inciting the incident.

Members of the two parties claim neither was involved in the clashes, but have called for calm as the police secure the area.

The head of the People for the State Coalition – opera-singer-turned-opposition leader Paata Burchuladze – accused the Georgian Dream of fomenting the violence and orchestrating a campaign of mass voter fraud.

The GD’s Secretary General Kakha Kaladze has denied the charges and called for calm and the public’s cooperation with police officials.


Marneuli is a city with a predominantly Azeri Shi’a Muslim community, located 55 kilometers to the south of the capital Tbilisi. It has been considered a battleground district by Georgia’s two main parties – the ruling Georgian Dream coalition and the opposition United National Movement of former President Mikheil Saakashvili.

As a non-ethnic Georgian city, where the predominant languages are Azeri and Russian, Marneuli had been a stronghold of the Georgian Dream – a party that usually polls well with Georgia’s minority communities.

In recent months, the People for the State and the United National Movement have gained ground with the local population, many of whom have grown disenfranchised with the Georgian Dream’s poor handling of the economy and unemployment – two issues that have hit the country’s ethnic, religious and linguistic minorities particularly hard.