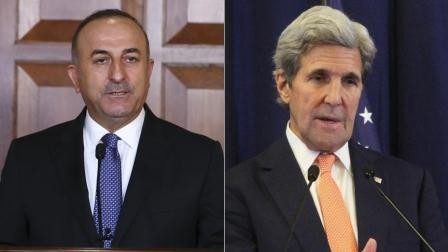 Turkish Foreign Minister Mevlut Cavusoglu and U.S. Secretary of State John Kerry had a phone conversation on Saturday, which was dominated by the Syria crisis, diplomatic sources said.


According to sources who spoke on condition of anonymity due to restrictions on talking to the media, the two ministers exchanged views on providing a permanent political solution to the ongoing Syrian crisis and ending the violence in the country as soon as possible.


Kerry called Cavusoglu while the minister was in Bangkok to attend the Second Asia Cooperation Dialogue Summit.


Syria has been locked in a vicious civil war since 2011, when the Assad regime cracked down on pro-democracy protests – which had erupted as part of the Arab Spring uprisings – with unexpected ferocity.


The Syrian Center for Policy Research, a Beirut-based NGO, has put the death toll from the six-year-old conflict at more than 470,000.