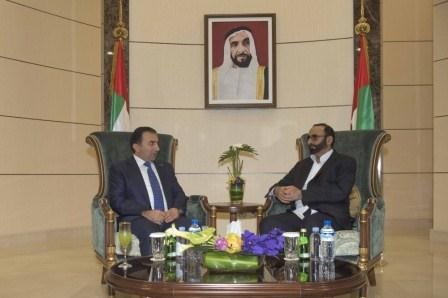 Touching upon the bilateral cooperation, Mr. Shikarov said there were fruitful opportunities for further improvement of ties. The diplomat also provided an insight into the cause and consequences of the Armenia-Azerbaijan, Nagorno-Karabakh conflict.

Mohammed Ahmad Al Bowardi, in turn, highlighted bilateral political relations between the two countries, and stressed the importance of the reciprocal visits in this regard.

The Minister said he was aware of the successful foreign policy carried out by President Ilham Aliyev in Azerbaijan in the difficult geopolitical and geo-economic situation.

Mohammed Ahmad Al Bowardi, recalled his recent visit to Azerbaijan as well as his participation in the ADEX 2016 Defence Exhibition.