Duterte, Najib outsing each other at dinner Video 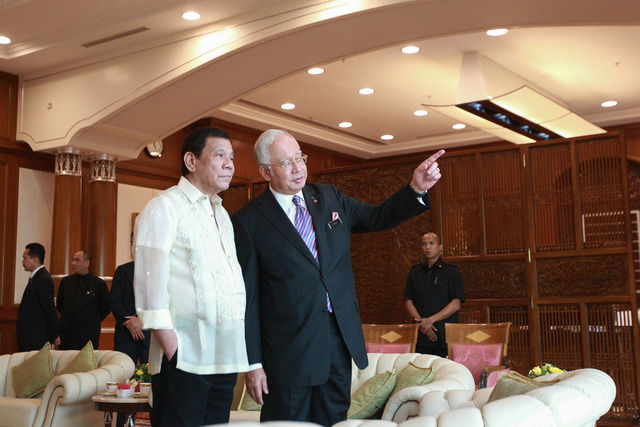 To cap off his visit to Malaysia, Duterte sings 'Wind Beneath My Wings' for Malaysian Prime Minister Najib Razak who, in turn, performs 'The Young Ones' for Duterte at a dinner he hosted for the visiting Philippine leader.

During his trip to Malaysia, it seems President Rodrigo Duterte got along well with Prime Minister Najib Razak on more than just official matters: the two leaders appear to share a love for singing.

On Duterte's last night in Malaysia on Thursday, November 10, the two leaders took to the stage to perform a song for each other.

Enthusiastic clapping accompanied Duterte as he walked onstage in the middle of a hall in Seri Perdana, the Prime Minister's official residence, where Najib was hosting a dinner for him.

Duterte then gave his rendition of the ballad, "Wind Beneath My Wings." Like his karaoke sessions in his favorite Davao City bar After Dark, Duterte sang solo with minimal gestures while reading from a lyrics book.

Najib's performance was livelier. The Malaysian leader, flanked by two other men, sang the more upbeat song, "The Young Ones" by Cliff Richards, complete with some hip swaying.

The two leaders also had a duet – "Shalala Lala" by the Vengaboys – that night.

This was the only time that Duterte sang during a dinner hosted by a foreign leader, according to National Security Adviser Hermogenes Esperon Jr, who has been to most of the President's trips abroad.

"The setting did not call for it in the other dinners, state or official," Esperon told Rappler.

Duterte's love for singing is known especially among Davaoeños. Since his mayorship, Duterte has been known to spend the wee hours of the morning in front of the karaoke machine, among his preferred ways of unwinding.