Thousands join fourth day of protests after US election 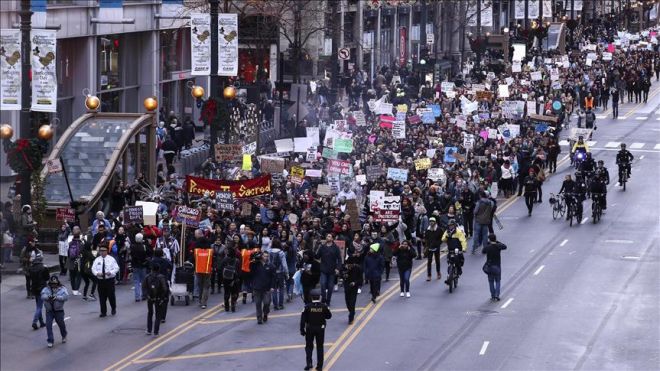 Thousands chanted "not my president" in New York City as they marched toward the Trump Tower, with similar protests taking place in several cities including Chicago, Los Angeles and Washington DC.

Though largely peaceful, rallies resulted in arrests and caused highways and bridges to be closed. One person was shot in Portland, Oregon, during a confrontation.

Voices of discontent making themselves heard nationwide follow what many thought was a shock defeat of Clinton after a bitter and divisive election cycle. Most polls placed her several points ahead, only to humbled by a clear 290-228 victory for the business mogul.

President-elect Trump took to Twitter to cry foul on protests late Thursday, calling the demonstrators "professional protesters, incited by the media", and describing the situation as "very unfair".

An avid social media user, Trump did an about-face hours later, saying he loves "the fact that the small groups of protesters last night have passion for our great country".

Meanwhile, millions of people have signed on to a joint call for members of the Electoral College -- who are expected to vote Trump into presidency next month -- to instead approve Clinton.

Electors fall along party lines, and exceptions have been extremely few in American history, still less to close a gap of more than 60 votes.