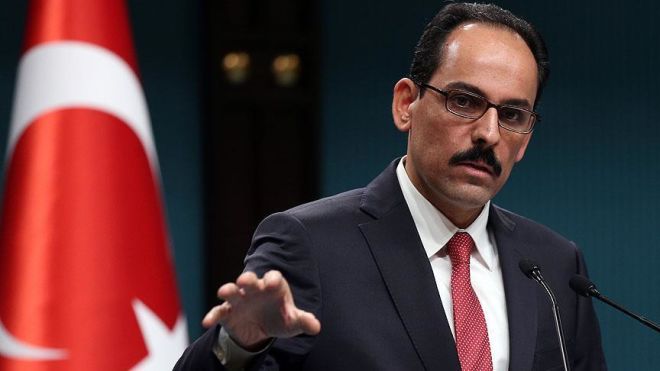 Presidential spokesman Ibrahim Kalin criticized Western media and European officials Wednesday for a lack of condemnation after a Turkish regional official was recently killed by the PKK.

District governor Muhammet Fatih Safiturk died in hospital on Nov. 11 following a bomb attack carried out by PKK terrorists on his office in Derik, around 41 kilometers (25 miles) west of Mardin a day earlier.

In a Wednesday column for Turkish newspaper Daily Sabah, Kalin wrote: “No EU ambassador was present at [Safiturk’s] funeral nor did we hear anyone contacting Safiturk's family to express their condolences."

“No EU committee was convened to investigate and condemn the systematic terror attacks by the PKK and those who support them in politics and the media,” he added.

The presidential spokesman accused European officials of making “half-hearted statements” to condemn PKK attacks but of saying nothing about those who supported the group directly or indirectly.

"They spend more time criticizing the government for taking action against those who seek to justify and glorify PKK terrorism rather than providing concrete help," Kalin wrote.

He went on to say that although the EU considered the PKK to be a terrorist organization, it allowed their operatives and propagandists to operate in Europe.

"Despite the fact that you cannot defeat terrorism with another terrorist organization, the U.S. government continues to supply weapons, ammunition, training and intelligence to the PKK's branch in Syria," he said.

The U.S. has long listed the PKK as a terrorist organization, which is responsible for the deaths of tens of thousands in Turkey, in a decades-old armed campaign. The PYD, however, is seen by the Washington administration as a useful partner in Syria against Daesh.

Kalin said European officials’ statements on the recent detentions of some Peoples’ Democratic Party (HDP) lawmakers “reinvigorate a perception” that Europe had double standards on terrorism.

"By standing with those who whitewash terrorism in the name of freedom of expression, European politicians seek to impose a principle on Turkey that they would never allow in Europe.

He said even after the July 15 violence in Turkey, Europeans condemned the Turkish government more than the coup plotters.

"European officials said one thing to condemn the failed coup attempt and nine things to criticize the government for bringing the putschists to justice," Kalin wrote.

He said Europeans were busy giving accolades to those charged with criminal acts in Turkey: "This is a troubling trend and must be reversed. Otherwise, Europe will lose an entire nation."