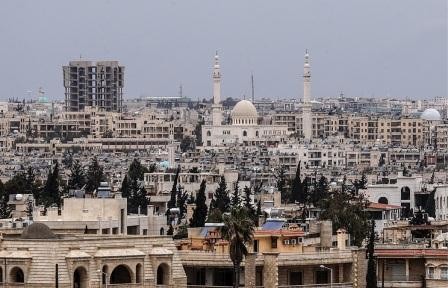 Sergei Shoigu blames the actions of the "moderate opposition" in Aleppo for postponement of the political process in Syria.

The beginning of the political process in Syria has been postponed indefinitely because of the actions of the "moderate opposition" in Aleppo, Russian Defense Minister Sergei Shoigu told a video conference on Tuesday.
He noted that "militants shoot dozens of civilians every day for trying to approach the humanitarian corridors."
"Is that the opposition it is possible to hold negotiations with? To eliminate terrorists in Syria, it is necessary to work together rather than put a spoke into partners’ wheel. The gunmen use this for their own benefit," the minister said. "As a result, the prospects for the beginning of the political process and the Syrian people’s return to peaceful have are postponed indefinitely," he said.

He also said that "over 2,000 so-called moderate opposition members carried out attacks on residential areas, schools and hospitals with the support of 22 tanks, 15 IFVs, multiple launch rocket systems and eight vehicles with suicide bombers."

Shoigu said most of this military hardware had been eliminated.

The minister recalled that eight humanitarian corridors have been opened in Aleppo, and the Russian Center for Reconciliation delivers humanitarian aid to the city on a daily basis.

According to a statement by Syria’s command released on Monday, over 80 civilians died and nearly 300 others were injured in Aleppo’s artillery bombardments between October 29 and October 31 alone, most of them women and children. In addition to that, the command said shells containing chlorine gas had been used by terrorists in the Al-Hamdaniya neighborhood.

According to Shoigu, the Russian military have not been using combat aircraft in Syria’s Aleppo for 16 days already upon the orders of President Vladimir Putin.

"We have not been using warplanes in Aleppo for 16 days following the order of the commander in chief of the Armed Forces of the Russian Federation," Shoigu said.

Russian and Syrian warplanes halted their airstrikes on Aleppo on October 18.

On October 28, the Russian military asked Putin to permit resumption of airstrikes on eastern Aleppo, citing militant activity. However, the president gave no such permission and the humanitarian pause was extended.