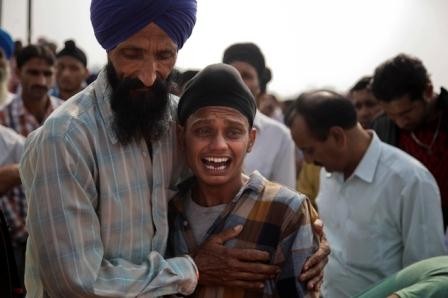 Seven civilians were killed and nine others wounded by Pakistani shelling in Kashmir on Tuesday, Indian officials said, as cross-border firing by the two countries' troops escalated in the disputed region.

A police officer said five people, including two children, were killed by Pakistani shelling in Ramgarh sector. The officer spoke on condition of anonymity in keeping with department policy.

Kotwal said hundreds of civilians living in villages along the frontier have been evacuated to safer places in recent weeks and are spending nights in government-run shelters.

An army officer and a border guard official in the Indian-controlled portion of Kashmir said Indian soldiers "befittingly" replied to what they described an "unprovoked" violation of a 2003 cease-fire accord.

The officers, who spoke on condition of anonymity because they were not authorized to brief the media, said the exchange of fire was continuing at several places along the frontier.

The Indian and Pakistani armies guard the Line of Control that divides the two parts of Kashmir. Each country also has a separate paramilitary border force that guards the frontier separating Indian-controlled Kashmir and the Pakistani province of Punjab.

An Indian soldier was killed and four others were wounded when troops from the two nuclear-armed countries exchanged mortar and gunfire in Rajouri sector on Monday night.

Troops from the two countries have regularly traded fire since last month, when India said it carried out "surgical strikes" against militants in the Pakistan-controlled part of Kashmir. Pakistan dismissed the claim and called on India to produce evidence to back it up.

The tensions have also escalated at the government level, and last week each nation expelled a diplomat.

Both sides accuse the other of initiating the firing.

Two of the three wars between India and Pakistan since 1947 have been fought over their competing claims to Kashmir. Each has administered part of Kashmir since 1947.