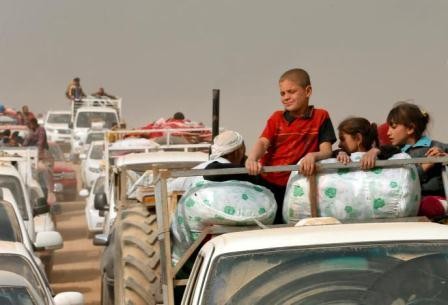 Iraqi forces backed by a U.S.-led air coalition targeted Islamic State defenses on the eastern edge of Mosul with artillery fire and air strikes on Tuesday, a day after fighting for the first time inside the city.

Blackish grey smoke hung in the air east of the Islamists' stronghold and the regular sound of outgoing artillery fire could be heard, said a Reuters reporter near Bazwaia, about five km (three miles) east of Mosul.

Explosions could be heard further east.

"We are currently fighting battles on the eastern outskirts of Mosul," Lieutenant-General Abdul Wahab al-Saidi of the elite Counter Terrorism Service (CTS) said.

"The pressure is on all sides of the city to facilitate entry to the city center."

Two weeks after Iraqi forces, backed by extensive U.S.-led ground and air support, launched their campaign to retake Mosul from Islamic State, they have cleared scores of villages and towns on the Nineveh plain east of the city and are advancing along the Tigris river from the south.

But fighting inside the city itself, the jihadists' last big bastion in Iraq and still home to 1.5 million residents, could take months.

Commanders have warned the fighting could last for months.

In Bazwaia, CTS guards told Reuters that a suicide car bomber tried to attack their position early on Tuesday, but they halted it with machine gun fire. Rubble and parts of the attacker's body could still be seen by a nearby berm.

As well as the suicide attacks, the Islamic State militants have slowed the army's advance with snipers, mortar fire, roadside bombs and booby traps inside abandoned buildings.

They have also displaced thousands of civilians from villages and forced them to walk alongside retreating fighters toward Mosul, using them as "human shields", U.N. officials and villagers have said.

Mosul is many times bigger than any other city controlled by Islamic State in either Iraq or Syria. Its recapture would mark the end of the Iraqi wing of the caliphate which it declared in parts of both countries two years ago although the hardline Sunni militants have recovered from previous setbacks in Iraq.

Prime Minister Haider al-Abadi said on Monday that Iraqi forces were trying to close off all escape routes for the several thousand Islamic State fighters inside Mosul.

"God willing, we will chop off the snake's head," Abadi, wearing military fatigues, told state television. "They have no escape, they either die or surrender."

The United Nations has said the Mosul offensive could trigger a humanitarian crisis and a possible refugee exodus if the civilians inside in Mosul seek to escape, with up to 1 million people fleeing in a worst-case scenario.

The International Organisation for Migration said that so far nearly 18,000 people had been displaced since the start of the campaign on Oct. 17, excluding those forced back into Mosul by the retreating jihadists.

In Bazwaia, recaptured by Iraqi troops a day earlier, about a dozen civilians could be seen coming out of the village, waving white flags and bringing with them their livestock -- around 200 sheep and a few cows and donkeys.

Saidi, the CTS officer, said 500 civilians had already been moved from Bazwaia to a camp for displaced people further away from the front line.

"We expect to encounter more civilians as we push through the city," he said.