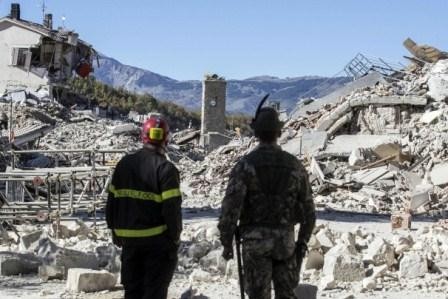 Earthquake aftershocks gave central Italy no respite on Tuesday, haunting a region where thousands of people were left homeless and frightened by a massive weekend tremor that razed centuries-old towns.

As the country observed the religious holiday of All Saints' Day, tremors were coming at a rate of several per hour in the mountainous region 100 kilometers (62 miles) north of Rome, the national geological institute said Tuesday.

More than 1,100 have been registered since Sunday's magnitude-6.6 quake, the strongest to hit Italy in 36 years.

The strongest aftershock, at magnitude-4.7, hit Tuesday morning. Italian TV Sky reported some further buildings had collapsed in at least two villages, and the impact was felt as far away as Rome.

The tremors are taxing a population that's already on edge, with 15,000 in need of housing, according to civil protection officials. The figure does not include the 2,000 who remained displaced from a first deadly quake in August, which left 300 dead.

The civil protection agency estimates that a total of about 100,000 people have been affected in some way by Sunday's quake, whether through damage to property or being frightened out of their homes.

While thousands have been moved to live in empty hotels on the coast, out of harm's way, a growing number of residents insist on staying put. Some sleep in cars, others argue they have businesses to tend to, or think that if their homes are still standing they remain the safest place to be.

Because the weather is getting cold in the mountain villages, with night temperatures nearing freezing point, the government does not want to build extensive tent housing. Three such tents hosted 10 to 12 people Monday night in the town of Norcia, which suffered extensive damage, including the collapse of a Medieval basilica that has been the symbolic heart of the Benedictine order for centuries and a big draw for tourists.

Many locals are livestock owners who cannot relocate because they need to stay near their animals at night or find herds that have dispersed. Wolves in the area are a problem in particular for sheep.

Angelo Stazzo, a farmer in the mountains near the village of Castelsantangelo, spent a day finding cattle that had run into the woods out of fear. The blocked roads make it more difficult to find them and bring them to safety.

The cattle and sheep are his livelihood, but they will need to have their barns rebuilt within weeks before freezes begin. In the meantime, he and fellow farmers have to live in caravans without electricity or hot water.

"Home?" he told the AP as he trudged back to his lodgings. "There is no home now."

The region's plight contrasted with the mirth of children in the rest of Italy, who on Monday night dressed up as the dead for Halloween, an imported tradition that is increasingly celebrated here.

Schools in Rome were closed on Monday for precautionary checks, which the mayor hopes to wrap up in time for them to reopen on Wednesday, after the holiday.

Wednesday is All Souls' Day, when Italian families traditionally visit cemeteries to remember relatives. Cemeteries were heavily damaged in the stricken mountain villages, with images showing coffins spilling out of the built structures that are typical in Italy.