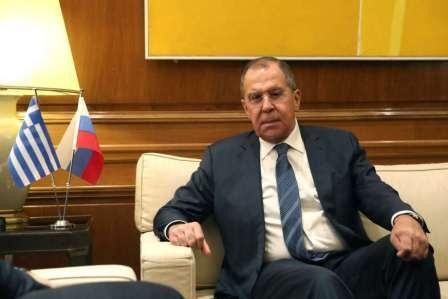 Sergey Lavrov made the remarks Wednesday on a visit to Greece, a NATO and European Union member that has maintained close ties with Russia.

He didn't name any countries. Peace talks have involved U.S. Secretary of State John Kerry and the foreign ministers of Turkey, Saudi Arabia, Qatar, and Iran.

"Unfortunately on many occasions, efforts for a political resolution have been sabotaged. That is not in accordance with U.N. Security Council resolutions . Some parties are backing extremists aimed at removing the Assad regime," Lavrov said.

"If those resolutions had been carried out in an honest way, the situation in Syria would have already improved."

Lavrov met with Prime Minister Alexis Tsipras and President Prokopis Pavlopoulos, as part of a friendship initiative between the two countries that included multiple cultural exchanges and a visit to Greece in May by Russian President Vladimir Putin.

Russia's relations with the U.S. and its allies came under further strain after Moscow used airpower to back a Syrian government siege of Aleppo, Syria's second largest city. Peace talks resumed after Russia halted the airstrikes last month.

"We have seen that after every humanitarian pause, the opportunity is used by the terrorists to strengthen their manpower and weaponry," Lavrov said.

Athens is keen to maintain close ties with fellow-Orthodox Christian Russia, despite its participation in EU sanctions against Moscow, and a gas pipeline project designed to limit Russia's regional energy dominance.

Russia is one of Greece's main trading partners, but business has been hit by the sanctions and a drop in commodity prices.

Lavrov's trip comes less than two weeks before a visit to Greece by President Barack Obama.