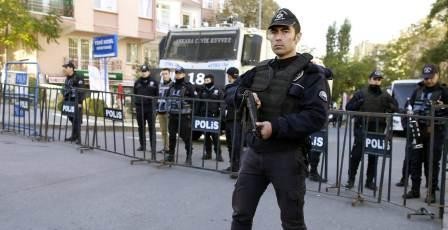 Turkish officials defended the controversial mass arrests of a dozen lawmakers from the nation’s major pro-Kurdish party, while the nation braced for possible violent reactions to the latest crackdown against President Recep Tayyip Erdogan’s political opposition.

Turkish authorities in overnight raids detained the leaders of Peoples’ Democratic Party, Selahattin Demirtas and Figen Yuksekdag, as well as nine others for defying subpoenas to testify in connection with terrorism-related charges. Prosecutors have recommended their arrest until trial.

The detentions mark the government’s most significant step yet against pro-Kurdish politicians since it began a sweeping crackdown in response to the failed coup attempt in July. The HDP’s popularity has soared under the leadership of Mr. Demirtas, who emerged as a popular challenger to check Mr. Erdogan’s expanding power.

Mr. Erdogan accuses the party, known as the HDP, of supporting the Kurdistan People’s Party, the outlawed Kurdish militant group seeking autonomy in Turkey’s mainly Kurdish regions. Earlier this year, his ruling party voted to strip the lawmakers of their parliamentary immunity to allow them to be charged under the nation’s terrorism laws.

The HDP, which has 59 deputies in the 550-member parliament, rejects violence and has attracted voters from across Turkey’s political spectrum in part due to its policy of a negotiated peace deal to end the nation’s long-running insurgency that has killed more than 40,000 people.

Justice Minister Bekir Bozdag defended the arrests as a move demanded by Turkish law since the officials have broken court procedure by refusing to submit statements in the investigation against them.

"The detained members of parliament didn’t maintain the law. They didn’t recognize the law. [The authorities] are meeting the requirements of our constitution and state of law. This is a natural right," Mr. Bozdag said.

Mr. Demirtas in a statement submitted to the court Friday denounced the process as political theater.

Immediate reaction to the arrests was swift. A car bomb exploded Friday morning outside a security headquarters in Diyarbakir, the nation’s largest Kurdish-majority city, where Mr. Demirtas lives and was detained. At least eight people, including five civilians, were killed in the blast, according to Turkish officials. There was no immediate claim of responsibility, although the government blamed the Kurdistan People’s Party, known as the PKK.

An umbrella organization of Kurdish militants known by its initials KCK issued a statement published in pro-militant Kurdish media calling for all Kurds to take to the streets to resist what they called Mr. Erdogan’s "fascism."

Meanwhile, internet access around Turkey remained throttled, preventing access to many popular social-media platforms including Twitter, Facebook and YouTube. Prime Minister Binali Yildirim said in remarks covered live on Turkish television that the move was necessary as a temporary security precaution and would be reversed only when conditions allowed.

The Turkish currency sunk to a record low against the U.S. dollar, and financial markets also suffered losses.

The leader of Turkey’s largest opposition parliamentary bloc chastised the government for jailing his HDP colleagues, saying it was sure to destabilize the country already on edge due to increased security threats by Islamic State and the widening purge.

"If you put our elected leaders in jail then you will never bring peace to this country," said Kemal Kilicdaroglu, the head of the Republican People’s Party, or CHP. "Turkey is not being managed well, and this is a perception that is damaging Turkey’s credibility in the world."

The HDP crackdown marks the latest in several waves of arrests around Turkey since the failed July coup. Mr. Erdogan has accused the U.S.-based imam Fethullah Gulen of masterminding the putsch, but has used its expanded powers under the current state of emergency to move against both his alleged supporters in Turkey as well as terrorist threats, including the Kurdish insurgency.

Both the European Union and the U.S. have repeatedly warned Turkish leaders against sweeping measures that not only target alleged coup-plotters, but also silence the opposition and stoke the Kurdish conflict in the country’s southeast.

The PKK, which is listed as a terrorist organization by Turkey and its North Atlantic Treaty Organization allies, has fought for Kurdish autonomy in southeast Turkey since 1984. Mr. Erdogan oversaw a brief truce and started peace talks with the movement in 2013, using the HDP as a mediator due to its standing within Turkey’s large Kurdish minority. Those talks crumbled last year, in part due to a larger-than-expected national electoral victory for the HDP that briefly ended Mr. Erdogan’s Justice and Development Party’s long-running majority in parliament.

The Interior Ministry said Friday that prosecutors are seeking to detain 15 lawmakers from the HDP.

While the government said the measure was to make HDP deputies testify, a significant number of HDP officials who have been taken under custody for depositions have been arrested pending trial, according to the party.

HDP lawmakers, led by Mr. Demirtas and Ms. Yuksekdag, defied prosecutors’ demands that they testify, accusing the government of seeking to undermine elected officials and civilian politics amid a surge in violence. More than 2,200 civilians, Turkish security forces and Kurdish militants have been killed since the resumption of fighting last year.