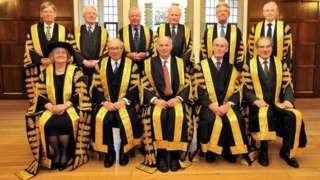 The government's appeal against the High Court ruling that MPs must vote on triggering Brexit will be heard in the Supreme Court from 5 December.

It will last four days, with the decision expected in the new year.

Theresa May has said she is "clear" she expects to start talks on leaving the EU as planned by the end of March.

Campaigners say MPs and peers have to scrutinise the government's plans beforehand, but ministers say they can decide without this happening.

The High Court ruled last Thursday that Parliament should have a say before the UK invokes Article 50 of the Lisbon Treaty - which triggers up to two years of formal EU withdrawal talks.

Labour has said it will not attempt to delay or scupper this process if a vote goes ahead but pressure is mounting on the government from the devolved legislatures.

The Scottish government is pressing for the Holyrood Parliament to be given a binding vote on Article 50 and will seek to oppose the UK government as it makes the case for its own involvement in the decision.

The Welsh government has also said it intends to intervene in the appeal process to clarify the implications of the judgement for the future of devolution in Wales and the respective powers of the UK executive and the Welsh Assembly.

And Northern Ireland's top lawyer has said a separate legal challenge to Brexit should "leapfrog" the usual legal process and go directly to the Supreme Court.

The government said it was going to appeal almost as soon as the ruling came out and the Supreme Court has now granted permission - pushing through the process at a far faster pace than usual because of the importance of the case.

After Lord Toulson's retirement this summer, the appeal will be heard by all 11 remaining Supreme Court justices, led by their President Lord Neuberger.

At the completion of legal submissions, the justices will reserve their decision to a date "probably in the new year", a spokesman for the court said.

He added: "The Supreme Court will sit in its largest courtroom and make available a live video feed in the other two courtrooms in the building to enable as many members of the public as possible to observe proceedings.

"It should be added that, as with all Supreme Court proceedings, this appeal will be live streamed on our website, so it is not necessary for people to attend the building in person to watch the hearing."

The lead claimant in the case against the government, investment fund manager Gina Miller, has said it is vital that the UK's negotiating position is voted upon by MPs. She added that for this not to happen would mean ministers were acting like a "tin-pot" dictatorship.

There is some debate about whether a vote at Westminster on invoking Article 50 would require a full Act of Parliament, or whether it could happen much more speedily by MPs and peers agreeing to a resolution - a written motion - instead.

But Brexit Secretary David Davis has suggested a full Act of Parliament is more likely should the government lose its case.