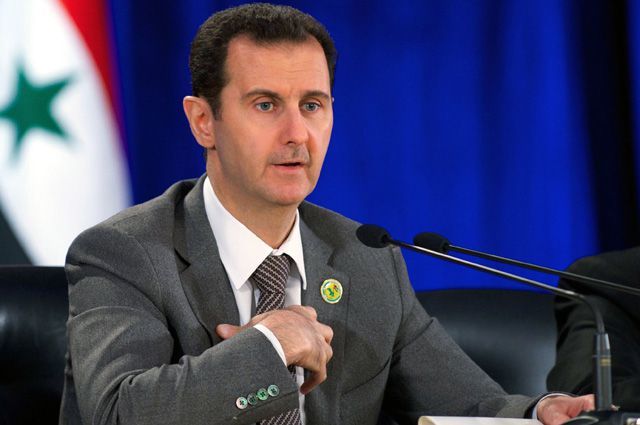 The Syrian President warned against taking statements by western governments at face value, as in Aleppo, they seemed to care more about saving terrorists than civilians. He also slammed the lackluster reaction to ISIS’s onslaught on Palmyra.

Axar.az reports that, President of Syria Bashar al - Assad told that in an interview with RT news agency.

President Bashar Assad sat down for an interview with RT’s Maria Finoshina as the war in Syria has hit a new critical point with the Syrian Army’s liberation of Aleppo and Islamic State’s (IS, ISIS/ISIL) return to Palmyra. Here’s a fragment of the interview, which is to be exclusively aired on RT on Wednesday.

Reporter: Palmyra is another troubled region now, and it’s now [being] taken by ISIS, but we don’t hear a lot of condemnation about it.

President Assad: Exactly, because if it was captured by the government they would be worrying about the heritage. If we liberate Aleppo from the terrorists, the western officials and the mainstream media, they are going to be worrying about the civilians. They do not worry when the opposite happens, when the terrorists are killing those civilians or attacking Palmyra and destroying the human heritage, not only the Syrian heritage.

[The Palmyra offensive of] ISIS, if you look at the timing of their attack is related to what is happening in Aleppo. This is the response to what is happening in Aleppo – the advancement of the Syrian Arab Army – and they wanted to undermine the victory in Aleppo and at the same time to distract the Syrian Army from Aleppo to make it more toward Palmyra and stop the advancement. But, of course, it did not work.

Reporter: Western countries have been repeatedly asking Russia and Iran to put pressure on you to, as they put it, stop the violence. Just recently, six western nations asked Russia and Iran again to put pressure on you, asking for a ceasefire in Aleppo. At the time when your army was progressing, they were asking for a ceasefire.

Assad: It’s always important in politics to read between the lines, not to be literal. It doesn’t matter what they ask. The translation of their statement is for Russia [to] “please, stop the advancement of the Syrian Army against the terrorists.” That is the meaning of their statement, forget about the rest: “You went too far in defeating the terrorists, that shouldn’t happen. You should tell the Syrians to stop this. We have to keep the terrorists and to save them.”