Perpetrator in Berlin attack is armed and at large 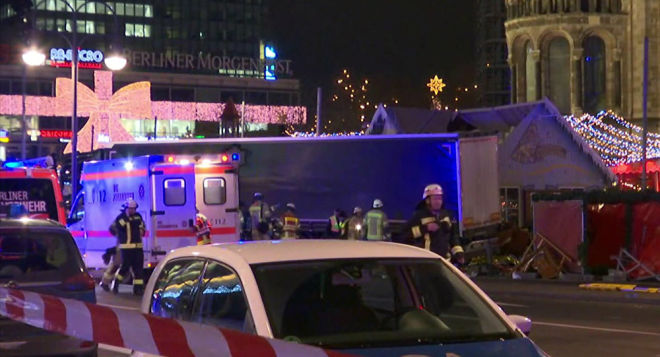 Arrested Pakistani national was not a perpetrator in the Berlin deadly truck attack, die Welt reports citing German police, the actual perpetrator still has weapon and is still at large. The real criminal can still do further damage, the police warned.

A man arrested following the deadly truck ramming attack on a Berlin Christmas market was not the perpetrator of the attack while the real attacker is still at large, local media on Tuesday. "We have the wrong man… The real perpetrator is still armed, at large and can cause new damages," a source in Berlin police told Die Welt media outlet.

At the same time, the Berlin police chief Klaus Kandt expressed doubt on Tuesday that a man detained in relation to a truck attack on a Christmas market in Berlin was the perpetrator of the attack.

"The investigation is ongoing, it is necessary to check DNA traces, carry out other investigatory actions. I am presently not sure that the detainee is the perpetrator," Kandt told a press conference. The suspect in the deadly truck-ramming on a crowd in Berlin denies his role in the crime, police in the German capital said Tuesday following reports that the criminal may be at large. "The arrested suspect currently denies [involvement in] the #Breitscheidplatz. We are therefore particularly vigilant," the police said via Twitter, advising the public to do the same. The disclosure follows the German press quoting a police source as saying "we have the wrong man," adding that the real perpetrator could be armed and still at large. On Monday, a truck rammed into the crowd at the Berlin Christmas market on the Breitscheidplatz square, killing 12 people and injuring 48 more. The country's Interior Ministry has labeled the incident a terrorist attack.