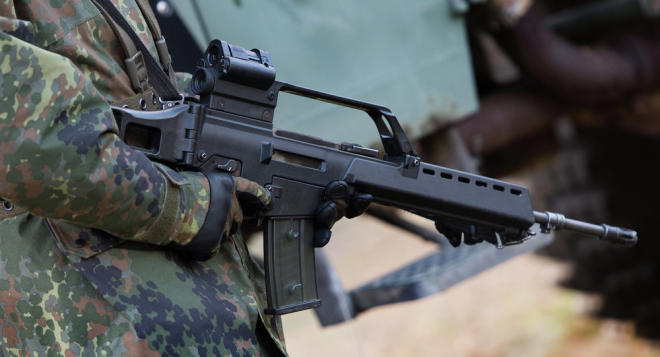 In 2015 that the G36 had issues with overheating and shooting inaccurately in hot environments. This was one in a number of embarrassing issues facing the German military, including missing spare parts, poor helicopter maintenance, and broken-down tanks. Tender requirements dictate that a new assault rifle must be a gas-operated weapon with automatic and single-fire capability, while also chambered in the 5.56x45 mm NATO format. The firearm must also be outfitted with a STANAG 4694 NATO Accessory Rail (NAR), a fire suppressor, and other NARs to be situated on the handguard.

According to IHS Janes, dual controls to accommodate left- and right-hand users has also been requested, and the contract includes the delivery of carrying equipment, a flashlight and a laser designator. Without a suppressor, the rifle must be less than 900mm and without ammunition, optics and magazine, the maximum weight is set at a little over 8 pounds, with a receiver life of 30,000 rounds and a barrel life of 10,000 rounds. Five comparison models will be included in the 1,750 serially-produced rifles, along with 40 for compatibility checks with optical sights and qualification tests.