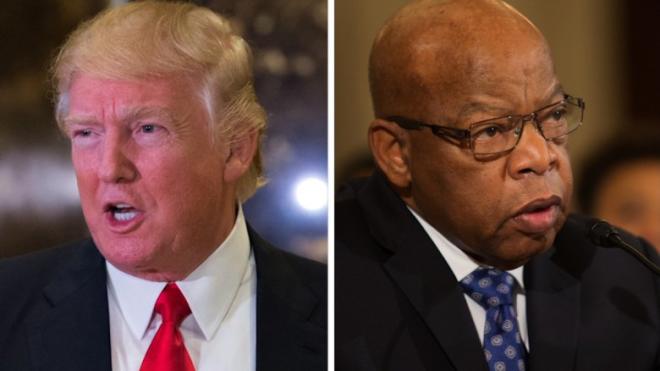 President-elect Donald Trump harshly responded to civil rights icon and Georgia Rep. John Lewis on Saturday, calling him "all talk" and "no action" after Lewis said Trump was not a "legitimate" president.

Axar.az reports that, "Congressman John Lewis should spend more time on fixing and helping his district, which is in horrible shape and falling apart (not to mention crime infested) rather than falsely complaining about the election results. All talk, talk, talk - no action or results. Sad," Trump tweeted Saturday, which happened to fall on the weekend of the Martin Luther King Jr. federal holiday.

Trump later doubled down on his criticism -- though he did not take aim at Lewis' district -- tweeting Saturday night: "Congressman John Lewis should finally focus on the burning and crime infested inner-cities of the U.S. I can use all the help I can get!"

Lewis -- an ally of King who was brutally beaten by police in Selma, Alabama, in 1965 while marching for civil rights -- represents a Georgia district that includes most of Atlanta. On the campaign trail, Trump regularly decried crime in urban areas while pledging to revitalize neighborhoods primarily populated by black Americans.

A Hillary Clinton supporter, Lewis criticized Trump's ascension to head of state due to Russia's alleged meddling in the 2016 election.