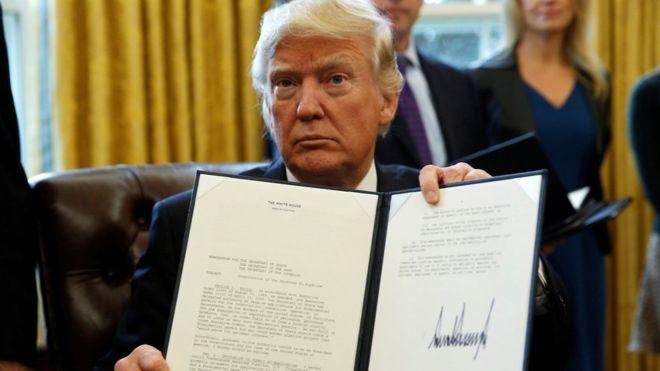 Axar.az reports that, when signing the executive order on the Keystone pipeline construction, Trump said that "we are going to renegotiate some of the terms and, if they like, we'll see if we can get that pipeline built."

"And if they like we will see if we can get that pipeline built — a lot of jobs, 28,000 jobs, great construction jobs," Trump said.

Moreover, Trump's orders urge to use US steel for pipelines built in the country. Trump said that the United States "will put a lot of steelworkers back to work."

In February 2015, President Barack Obama vetoed a bill to allow the construction of the pipeline.

When commenting on the construction of the constroversial Dakota Access Pipeline, Trump said that it will be "subject to terms and conditions negotiated by us."

Members of the Standing Rock Sioux Tribe and their supporters opposed to the Dakota Access Pipeline (DAPL) confront bulldozers working on the new oil pipeline in an effort to make them stop, September 3, 2016, near Cannon Ball, North Dakota

crude oil from North Dakota through the states of South Dakota and Iowa into Illinois. Last month, the US Army Corps of Engineers decided to halt final-stage construction of the pipeline because of environmental concerns.
The project has sparked protests with violent clashes involving local law enforcement officials, who have used dogs, water cannons, tear gas and physical violence in unsuccessful attempts to end the standoff.