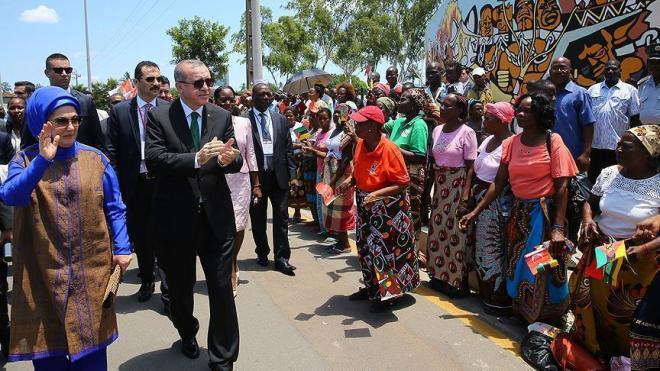 President Recep Tayyip Erdogan visited the three east African countries of Tanzania, Mozambique and Madagascar. The visit, part of Turkey’s ongoing “opening to Africa” policy started in 2005, seeks to
expand and deepen Turkey’s relations with the African continent as a whole.

Axar.az reports that, over the last decade as first prime minister and then as president, Erdogan has paid more than 30 visits to 23 African countries in total – a record number of visits for a non-African leader. This is an indication of Turkey’s strategic outlook on Africa as it develops new bi-lateral relations with African nations. Turkey expanded its diplomatic presence in Africa from a mere 12 embassies in 2004 to 39 in 2016. In 2012 and 2013 alone, Turkey contributed around $800 million to various aid programs in Africa.

The Turkish Cooperation and Coordination Agency (TIKA) has 16 offices in Africa, doing hundreds of projects around the continent from digging wells and opening clinics to training farmers and restoring historical sites. Tens of Turkish NGOs and aid organizations are also actively helping the needy. This new approach is reciprocated by the African nations. In 2008, the African Union enlisted Turkey as a strategic partner. The first Turkey-Africa Summit was held the same year in Istanbul, followed by the next Summit in Malabo, Equatorial Guinea in 2014.