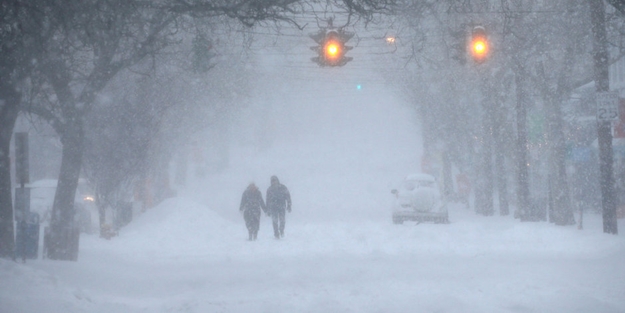 Winter Storm Stella pounded the East Coast Tuesday, dropping steady snow in the New York and Washington, D.C. regions and wreaking havoc on travel throughout the Northeast. Airline officials canceled most flights in and out of New York and Boston, and Amtrak suspended service between the two cities. Three governors declared states of emergency.

Axar.az reports that in Rochester, N.Y., emergency crews rescued the driver of a vehicle that plunged into a gorge amid reports of icy roads throughout the region.

Winter storm watches and warnings remained in effect from the mountains of North Carolina to northern Maine, a distance of more than 1,000 miles. But the National Weather Service canceled a blizzard warning for the New York City metro area.

The nor'easter was expected to move up the East Coast through most of Tuesday, slamming some areas with wind gusts of 60 mph or more. Parts of New York, New Jersey and Connecticut could see as much as two feet of snow.

National Weather Service meteorologist Jim Hayes told USA TODAY the bulls-eye for the most snow is southeastern Pennsylvania, northern New Jersey and the Lower Hudson River Valley in New York. New England is also a target, with the Boston forecast calling for 10 to 16 inches.

In the Rochester accident, authorities said a vehicle plunged 175 feet into the Genesee River gorge late Tuesday morning amid snow-covered and slippery roads. Fire officials said the unidentified driver survived the fall and was taken to an area hospital for evaluation.