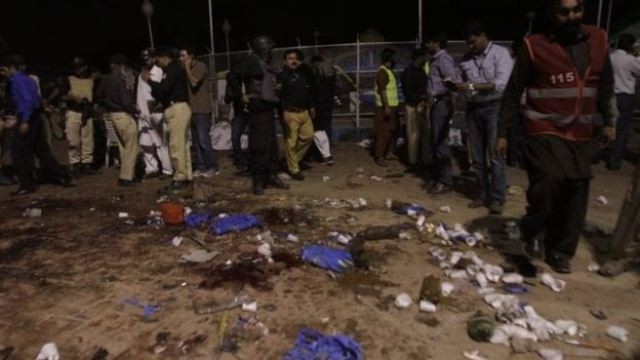 A Taliban splinter group says it carried out a suicide attack on a park in Lahore, Pakistan, which killed more than 70 people, including children and women.

Jamaat-ul-Ahrar said it had targeted Christians celebrating Easter, though police have said they are still investigating the claim.

Pakistan's president condemned the attack, and the regional government has announced three days of mourning.

At least 300 people were injured, with officials saying they expected the death toll to rise.

All major hospitals in the area were put on an emergency footing after the blast,early on Sunday evening.

A spokesman for Jamaat-ul-Ahrar, Ehsanullah Ehsan, said the group wanted to send a message to Mr Sharif that they "have entered Lahore", and threatened further attacks.

Jamaat-ul-Ahrar is a breakaway group from Tehrik-e Taliban Pakistan. It has carried out several other attacks on Pakistani civilians and security forces in recent months.

Mr Sharif expressed "grief and sorrow over the sad demise of innocent lives". He has postponed a planned trip to the UK.

The explosion, believed to have been carried out by one suicide bomber, hit the main gate to the Gulshan-e-Iqbal park in the early evening, a short distance from the children's playground.

Officials said the device had been packed with ball bearings.

In addition, UN Secretary-General Ban Ki-moon called the attack "appalling", saying the perpetrators should "be brought swiftly to justice".