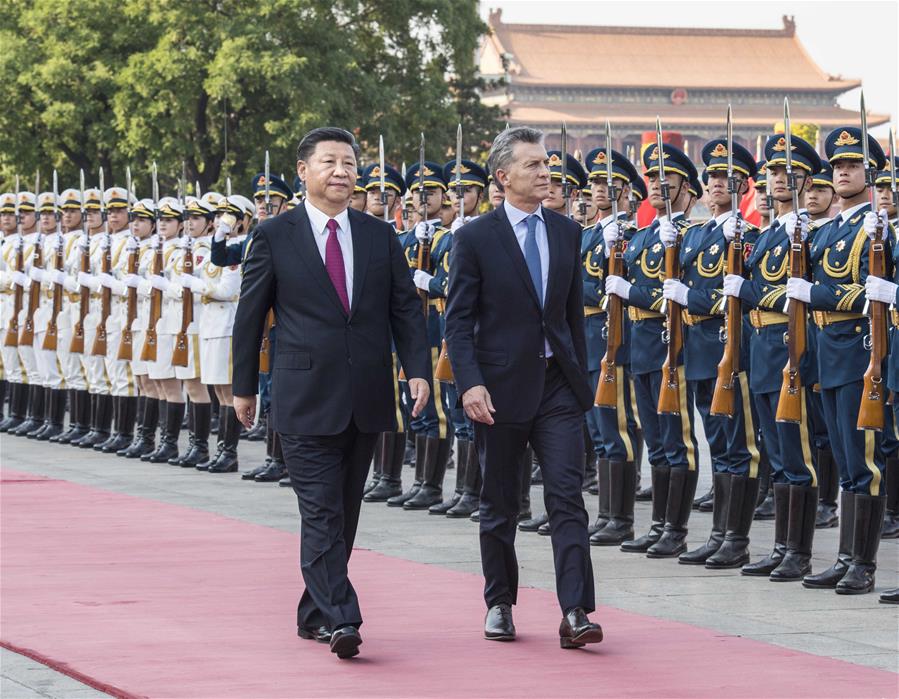 Xi called for dovetailing the Belt and Road Initiative with Argentina's development strategy, expanding cooperation in industries such as infrastructure, energy, agriculture, mining and manufacturing, and implementing existing major cooperation projects such as in hydro-power and railway fields.

Hailing Argentina's support and participation in the Belt and Road Initiative, Xi stressed that Latin America is the natural extension of the 21st Century Maritime Silk Road.

China stands ready to expand cooperation with Latin America, including aligning their development strategies through the Belt and Road Initiative, and jointly building a community of shared future, Xi said.

Argentina expressed willingness to apply for membership of the Asia Infrastructure Investment Bank, increasing financing options for its public infrastructure facilities, according to a joint statement released after the talks.

Both countries signed a MOU on football cooperation which will provide increased support for football training in China, said Zhu Qingqiao, director of Latin American affairs at the Chinese Foreign Ministry.

This year marks the 45th anniversary of China-Argentina diplomatic ties. Xi called for a series of cultural activities to be held to celebrate the anniversary and said the two sides should cement exchanges and cooperation in Antarctic affairs, culture, education, football, judiciary, law-enforcement, technology, tourism and youth affairs.

He also stressed that the two sides should continue to enhance political mutual trust and provide mutual support to issues concerning their core interests.