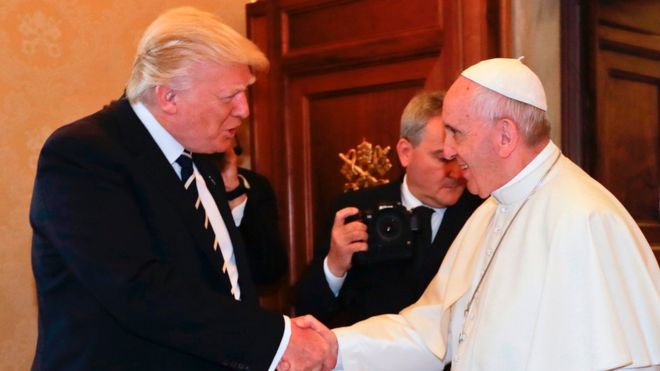 US President Donald Trump has met Pope Francis at the Vatican for a short private audience on the third leg of his overseas trip.

He arrived for the meeting along with his wife Melania, daughter Ivanka and son-in-law Jared Kushner.

The meeting was keenly awaited as the two men have already clashed at a distance on issues including migration and climate change.
Mr Trump will later meet Italy's president and prime minister.

He will then fly to Brussels for a Nato summit.

He earlier vowed to help Israelis and Palestinians achieve peace, as he ended the Middle East leg of his tour.

The US leader began his foreign trip with a two-day stop in Saudi Arabia over the weekend, urging Muslim countries to take the lead in combating radicalisation.

Mr Trump and his entourage arrived at the Vatican just before 06:30 GMT. The private audience was expected to last about 20 minutes, according to AFP news agency.