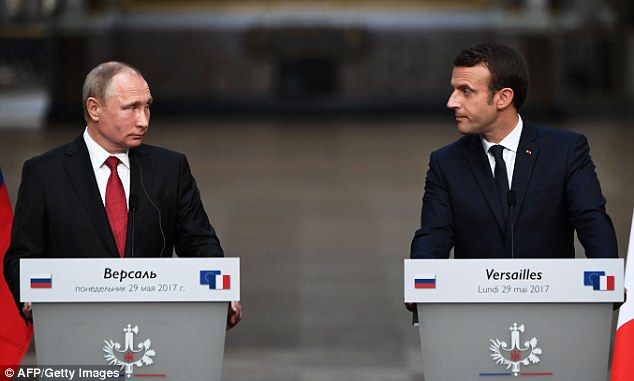 It came at the same press conference where President Macron's extraordinarily attacked two Russian media outlets, Russia Today and Sputnik, which he claims acted as 'propaganda' organs during his election campaign.

Macron cited it as the reason why he banned their reporters from his campaign headquarters during the race for the French presidency, which he went on to win, defeating Le Pen.

Despite denying claims of meddling, Putin described Le Pen as a politician who wants to develop friendly ties with Russia.

He says it would be strange if Russia rebuffed overtures from European politicians who want to strengthen relations.

The Russian leader, 64, says the meeting with Le Pen did not represent an attempt to sway the race and that Russia had been well-aware of opinion polls predicting Macron's victory.

Earlier today, Putin said he and Macron agreed to discuss pursuing closer cooperation on anti-terror efforts, having discussed the situation in Syria.