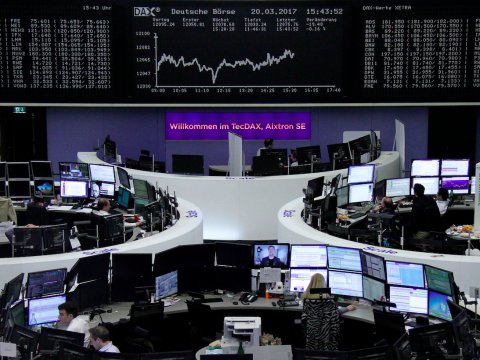 World stocks were poised to eke out slim gains for the week on Friday as a tentative recovery in oil prices spurred investors to hunt for bargains in the beaten-down energy sector and helped commodity-related currencies gain against the dollar.

Crude oil pulled away from this week's 10-month lows, although prices were still set for their worst first-half performance since 1997.

The slide in energy prices worsens the outlook for inflation creating a headache for the world's major central banks looking to normalize rates after years of ultra-loose policy.

"(The) oil price is the 'poster child' for victory of deflation," analysts at Bank of America Merrill Lynch said in a note of weekly investment flows.

Investors were beginning to shift allocations accordingly and moving out of assets typically in favor when prices are rising such as inflation-protected U.S. Treasury funds and bank loans.

Elsewhere inflows into equities slowed with some investors moving into laggard energy shares.

In currency markets, the bounce in oil helped commodity currencies such as the Canadian dollar.

The dollar weakened against a basket of major currencies .DXY and is now down more than 0.5 percent since this week's earlier highs as doubts about how quickly the Fed will be able to raise rates crept in.

"Inflation is likely to be the theme that moves currencies next week which will see the release of various U.S. indicators. They will be key as this week's slump in crude oil has clouded the U.S. inflation outlook," said Shin Kadota, a senior strategist at Barclays in Tokyo.

In Britain, on the one-year anniversary of last year's shock Brexit referendum in which Britons voted to leave the EU, sterling GBP=D3 extended gains.

The pound rose 0.37 percent against the dollar following more comments from Bank of England policymakers calling for a rate hike.