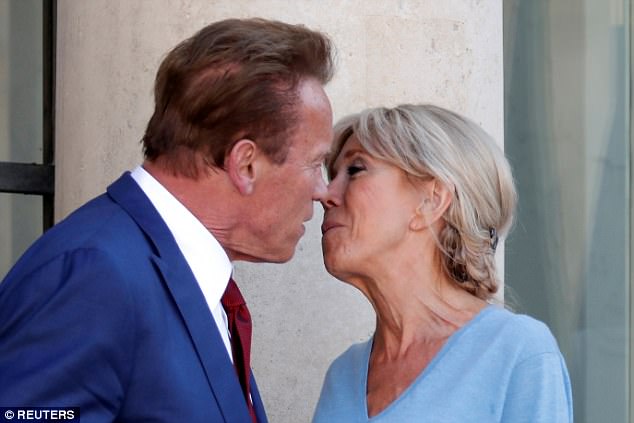 The two took a sun-splashed video selfie as the former Mr. Olympia visited Macron at the Elysee Palace in Paris.

"I'm here with President Macron," Schwarzenegger said, holding the phone, "we're talking about environmental issues and the green future." Beside him, a smiling Macron promises to "make the planet great again."

On the screen reads, "With President Macron, a great leader!"

Both men have been on the frontlines of environmental efforts and chided President Trump for his decision to pull out of the Paris climate agreement in early June. Macron has turned his Trump-esque "Make Our Planet Great Again" catchphrase into a government initiative aimed at poaching climate researchers from other countries.

On Tuesday, Schwarzenegger spoke in his home country of Austria during the Regions 20 Austrian World Summit, where leaders and scientists discussed efforts to "accelerate the realization of sustainable projects." Schwarzenegger is the founding chairman of R20, which aids in the advancement of "low-carbon and climate resilient economic development projects."

Schwarzenegger left his governor post in 2010 and is rumored to be mulling a 2018 U.S. Senate run. The former action star has been getting lots of press lately due to the various feuds he's had with Trump.

Schwarzenegger quit the president's The New Celebrity Apprentice reality show after just one season as host. Trump later said Schwarzenegger was fired because of the show's poor ratings.

Trump may not be the only movie action star challenging Trump. Dwayne "The Rock" Johnson announced his 2020 presidential bid on Saturday Night Live earlier this year.