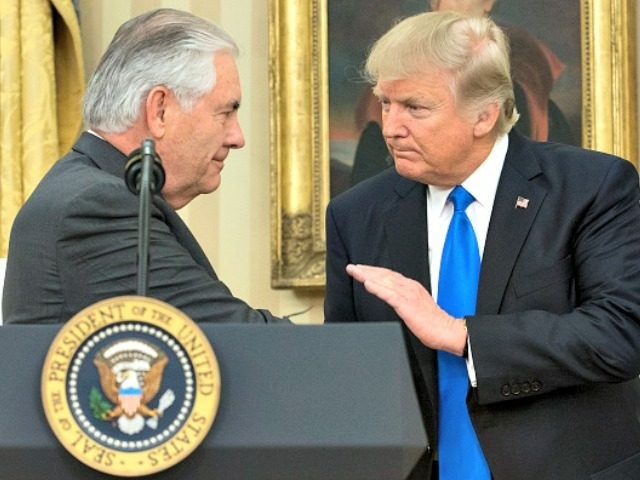 President Trump would not say on Thursday whether Secretary of State Rex Tillerson would serve out the president's first full term in office.

Axar.az reports that asked in an interview on Fox News's "The Ingraham Angle" whether the secretary of State would remain in Trump's administration for the duration of the president's first term in office, Trump replied: "we'll see."

"We'll see. I don't know who's going to be [at the State Department for the] duration," Trump said, noting that Tillerson is "doing the best he can" as the administration's top diplomat.

Still, the remark once again brought into question Tillerson's future in the Trump administration. The secretary of State fended off an NBC News report last month that he had called the president a "moron" after a particularly tense meeting over the summer, and had once been on the brink of resigning.

Tillerson sought to quash that report last month, holding an unusual news conference in which he praised Trump and insisted that he never had any plans of quitting. He has also held a spate of media interviews in recent weeks.

To be sure, Trump has at times appeared to undercut or contradict his secretary of State. Last month, after Tillerson suggested to reporters that the U.S. had a line of communication with North Korea, Trump took to Twitter to dismiss efforts to negotiate with Pyongyang.

"Save your energy Rex, we'll do what has to be done!" he tweeted at the time.