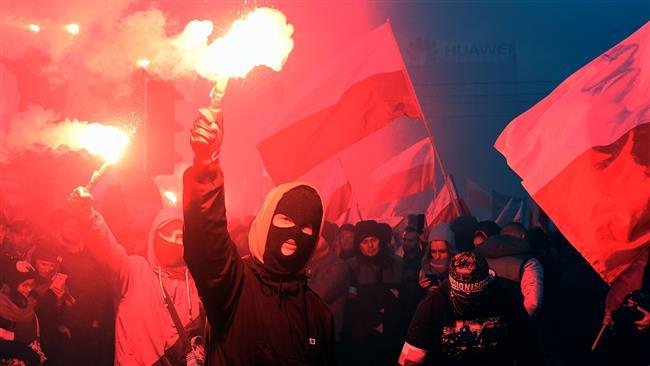 Tens of thousands of nationalist and fascist demonstrators have taken to the streets in the Polish capital of Warsaw, attending a rally on the country’s Independence Day.

An estimated 60,000 advocates of Polish far-right political parties along with nationalist campaigners from elsewhere in Europe joined the march on Saturday, in what was believed to have been one of the largest such gatherings in the world.

The Warsaw rally, coinciding with Poland’s 99th anniversary of independence, had been organized partly by neo-fascist groups such as the National-Radical Camp (ONR), the National Movement (RN), and the All-Polish Youth (MW).
The demonstrators chanted “White Europe of brotherly nations,” and “Death to the enemies of the homeland.”

Poland’s Interior Minister Mariusz Blaszczak, who reportedly has radical political inclinations, hailed the Warsaw rally as a “beautiful sight,” and said, “We are proud that so many Poles have decided to take part in a celebration connected to the Independence Day holiday.”

Other events were also held in the Polish capital to mark Independence Day, the day in 1918 that saw Poland rebirth as a nation after having been wiped off the map for 123 years. The day marks the country’s restoration of sovereignty at the end of World War I after being partitioned and ruled since the late 18th century by Russian, Prussian, and the Austro-Hungarian empires.
Earlier in the day, Polish President Andrzej Duda took part in several state ceremonies, also attended by European Union President Donald Tusk, a former Polish prime minister.

“Independence Day has always been and will continue to be a celebration of all Poles and not just one party. No politician in Poland has ever had nor will ever have a monopoly on patriotism,” Tusk said as he arrived at the airport in Warsaw.

Meanwhile, a smaller counter-rally by an anti-fascist movement also drew some 2,000 participants from left-wing parties, with police and organizers keeping the two groups apart to avoid the possibility of violence.

Marching on the streets of Warsaw in protest at nationalism and racism, the activists held banners that read, “Nationalism is a disease,” and “Class struggle, not national.”

Poland has refused to accept refugees, with some officials claiming that people of Muslim background are a threat to security. Less than one percent of the Polish population is Muslim.