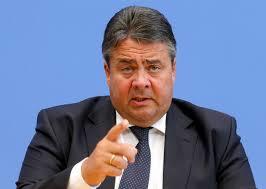 German Foreign Minister Sigmar Gabriel has slammed a far-left lawmaker on Tuesday, who raised the banned flag of the terrorist PKK/YPG in parliament, and defended his government’s measures against the PKK.

“The PKK is banned in this country because it used coercive methods, was involved in drug trafficking and human trafficking here,” Gabriel said during the parliamentary debate, and criticized far-left lawmaker Sevim Dagdelen.

During the debate, Dagdelen raised the flag of PKK’s Syrian branch YPG, which was banned by the German government in March, along with dozens of other symbols used by the terrorist group.

Sigmar Gabriel defended the recent initiatives taken by the German police against supporters of the PKK, who carried YPG flags during protests, or shared prohibited symbols on social media.

“When German police were taking action against this flag and those people who are responsible for this organization, they are enforcing the legal rules and regulations,” Gabriel stressed.

Germany, which is home to around 3 million immigrants from Turkey, outlawed the PKK in 1993 following violent protests carried out by group members in the country, but the group is still active in the country, with more than 14,000 followers.

Ankara has long demanded stricter measures against the propaganda, recruitment and fund-raising activities of the PKK terrorist organization in Germany.

The PYD and its military YPG wing are Syrian branches of the PKK, which has waged war against Turkey for more than 30 years.

Since the PKK launched its terror campaign in Turkey in 1984, tens of thousands of people have been killed.

The U.S. and the coalition have largely ignored PYD/YPG links to the PKK, which the U.S., the EU, and Turkey list as a terrorist group.