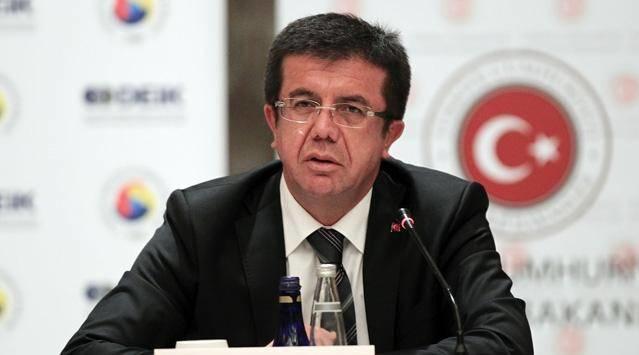 Turkey and Sudan could build a system that provides an opportunity to use domestic currencies in return for exporting to each other, Nihat Zeybekci told the Sudan-Turkey Business Forum held as part of Turkish President Recep Tayyip Erdogan's visit to Sudan.

He said that two countries had taken considerable steps for the future through signing a high-level strategic cooperation agreement.

Businesspeople's problems in a number of areas such as banking and transactions require mutual solutions, he added.

"We signed an economic cooperation agreement and put our two countries on the track of free trade," Zeybekci said.

The two countries soon will set targets and draw up a roadmap together, he stressed, adding "I think we will solve a number of problems when we meet again".

He underlined that Sudan had a great need for infrastructure investments, while Turkey needed several agricultural products grown in Sudan.

Turkey's commercial counselor in capital Khartoum will take office within 10 days in order to promote bilateral trade ties, he said.

He added that Turkey and Sudan's economic relations should be high level and based on a win-win situation.

Abdullatif Ahmed Mohamed Ijaimi, Sudan's agriculture minister, said early Monday: "We are looking for a strategic relationship between the two countries in various aspects and various fields of economic and social development."

In 2014, Turkey and Sudan signed an agreement that aims to rationalize the use of resources and agricultural potential and contribute to sustainable food objectives.

Under the agreement, around 780,000 hectares across five regions were earmarked for investment by Turkish entrepreneurs.

Today is the last day of Erdogan's two-day visit to Sudan. Tomorrow he is due to proceed to Chad and then Tunisia.