No legal grounds for Saakashvili’s extradition 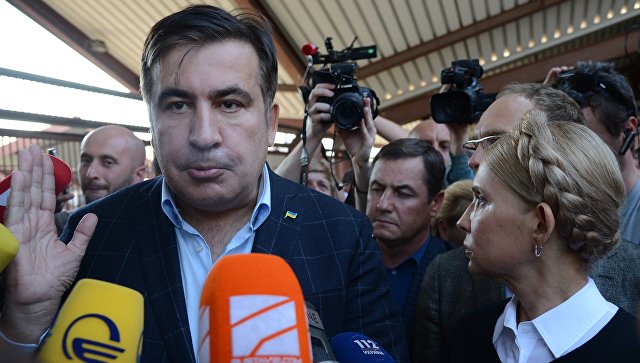 There are no legal grounds for deporting leader of the Movement of New Forces Mikhail Saakashvili from Ukraine despite the court ruling, which earlier upheld the decision to deny him refugee status, the politician’s Defense Attorney Ruslan Chernolutsky told on Tuesday.

"Today there are no legal grounds for Mikhail Saakashvili’s deportation, or for his extradition," he said.

According to Chernolutsky, the fact that the pre-trial restriction by way of night house arrest for Saakashvili expired last night, "brings the possible attempt by the authorities to illegally extradite him closer." The attorney stressed though that this effort cannot be carried out, because the Ministry of Justice had extended the extradition verification until all legal disputes were settled. "Saakashvili has the right to be protected by Ukraine, since the litigation of the case continues in court," he explained.

Chernolutsky noted that "one could expect anything" from the Ukrainian authorities, "even violating the law." In that case, Saakashvili’s defense attorneys are prepared to defend their client. "We will fight, even though the Ukrainian courts pander to the government. However, there are also European courts that we can apply to," he stressed.

The defense attorney recalled that Saakashvili has permission from Ukraine’s State Migration Service to stay in the country at least until March 1. "The deadline can be extended, if litigation with the migration service continues," he added.

Saakashvili, who had been charged with several crimes in Georgia, was granted Ukrainian citizenship in May 2015, which resulted in his Georgian citizenship being revoked. The former Georgian leader served as Ukraine’s Odessa Regional Governor, but in November 2016, he stepped down and set up his own party, criticizing the authorities in power. On July 26, 2017, President Poroshenko stripped him of his Ukrainian citizenship.

On September 10, 2017, Saakashvili and his supporters broke through a police cordon at the Shegeni checkpoint on the Polish-Ukrainian border. Shortly after that, he applied to the Ukrainian State Migration Service for asylum. However, the Migration Service rejected his appeal, besides that Ukrainian Prosecutor General Yuri Lutsenko said that there were no obstacles preventing Kiev from extraditing Saakashvili to Georgia.

On November 30, Ukraine’s Migration Service granted Saakashvili the right to stay in the country legally until March 1, 2018. On February 5, a court in Kiev rejected Saakashvili’s appeal against the ruling by the court of first instance, which refused to grant him refugee status or status as an individual in need of additional protection. The court also rejected the appeal by Ukraine’s Migration Service. According to Saakashvili, public officials were the first to file a complaint to speed up the process of deporting him from the country.