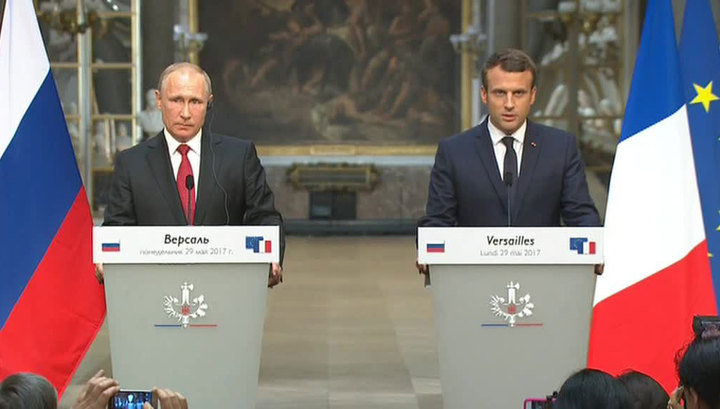 Russian President Vladimir Putin in a telephone call with his French counterpart Emmanuel Macron spoke about his recent meetings on Syria with Turkish leader Recep Tayyip Erdogan and Iranian President Hassan Rouhani, the Kremlin press service said in a statement.

"Putin informed Macron about the decisions made at the April 4 Russian-Turkish-Iranian summit in Ankara, which concern further cooperation aimed at ensuring long-term stability in Syria, strengthening the country’s sovereignty, unity, independence and territorial integrity," the statement reads. "It was noted that there was a need to advance the political settlement process through implementing the decisions made at the Syrian national Dialogue Congress, as well as to promptly establish a United Nations sponsored Constitutional Committee," the Kremlin press service added.

"The situation in Eastern Ghouta was also discussed, the focus was on the unprecedented large-scale operation to save civilians and withdraw militants not willing to lay down their arms," the statement says. "Russia emphasized the importance of consolidating the global community’s efforts to provide humanitarian aid to people in need across Syria in compliance with the United Nations Security Council Resolution 2401," the Kremlin press service pointed out.

The two presidents expressed "readiness to continue Russian-French consultations on key aspects of the Syria settlement."

The Kremlin press service added that the telephone call had been initiated by Paris.