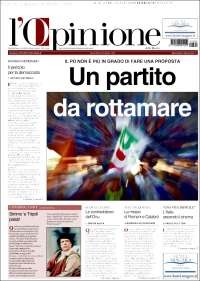 Written by journalist and researcher Domenico Letiziaç the article highlights the key reason of the disputes. It says it is necessary to put an end to the occupation of Azerbaijani territories by Armenia in order to solve the conflict. The article says that the UN Security Council`s four conflict-related resolutions, as well as the documents of the UN General Assembly, the Council of Europe and the European Parliament demand the withdrawal of Armenian armed forces from the occupied Azerbaijani territories.

The article also highlights the provocative information spread by Armenians.

In response to Armenian side's attempts to present the conflict in religious context, the article says that Azerbaijan is a secular, tolerant country where the Christians and Jews lived together in peace.

The article also highlights the statements of Italian MPs on the Armenia-Azerbaijan Nagorno-Karabakh conflict and the escalation of tension on the troops' line of contact.

The article urges the Italian government to comply with the UN conflict-related resolutions and contribute to the establishment of peace in the region.