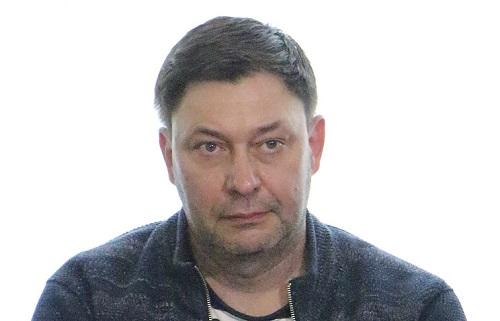 Attorneys of Kirill Vyshinsky, Editor-In-Chief of RIA Novosti Ukraine, who was charged with high treason and arrested for two months in Ukraine, have filed a request to Ukrainian President Pyotr Poroshenko and other government services on renouncing his citizenship, lawyer Andrei Domansky told.

"We have filed the request," the lawyer confirmed, noting that the procedure may take some eight or nine months.

Announcing his plans to give up Ukrainian citizenship at a Kherson court, which considered an appeal against his arrest on June 1, Vyshinsky said: "From now on I see myself as a citizen of only the Russian Federation." He also asked Russian President Vladimir Putin to provide him with legal assistance to be freed.

Russia’s Foreign Ministry demanded that Kiev clear Vyshinsky of all charges and release him.

On May 15, the Ukrainian Security Service (SBU) carried out a large-scale operation against RIA Novosti Ukraine staff members, accusing them of high treason. The news agency’s Chief Editor Kirill Vyshinsky was detained outside his home. Soon after that, searches were conducted in the news agency’s Kiev office and press center, as well as in some journalists’ apartments. At the same time, the SBU issued a statement claiming that "a network of media structures, which Moscow used for carrying out a hybrid war" against Kiev had been exposed.

On May 17, Vyshinsky was charged with high treason and arrested for two months by the Kherson City Court. If found guilty, he may face up to 15 years in prison. More than 40 staff members of the news agency were summoned for interrogation by the SBU.