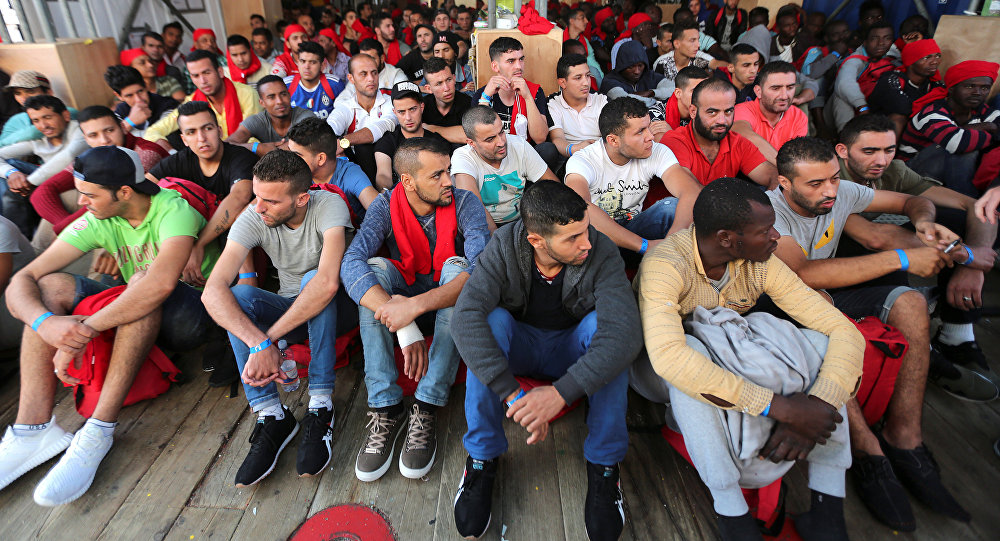 After crossing the U.S.-Mexico border seeking asylum, 123 men have been detained for weeks, spending up to 23 hours per day in cells and denied access to attorneys at a federal detention center in Sheridan, Ore., a lawsuit filed Friday by the American Civil Liberties Union alleges.

The ACLU of Oregon filed the emergency lawsuit in Portland requesting that a judge order officials of the Federal Bureau of Prisons and U.S. Immigration Customs and Enforcement to cease keeping attorneys from their clients. Many of the men, detained since early June, were held as part of the Trump administration’s newly instituted “zero tolerance” policy on illegal entry into the country and were separated from family members at the border. Since then, the Bureau of Prisons and ICE have prevented the detainees — who are awaiting “credible fear” interviews, a first step in the asylum process — from seeing or reaching their attorneys for legal advice, the suit claims.

“Incarcerating immigrants in a federal prison is a highly unusual move and unprecedented for Oregon,” said Mat dos Santos, legal director of ACLU of Oregon. Initially, the detainees were held in the federal prison’s general population. On June 20, ICE representatives informed dos Santos that the detainees would be relocated to another area, allowing them more time out of their cells.

Luis Garcia, an attorney at the centre on a nonlegal visit, spoke with five detainees on June 14, including Luis Javier Sanchez Gonzalez, who was separated from his partner, 5-year-old son and 18-month-old daughter.

All five men had been detained after requesting asylum at the border. Three did not know where their families were; it had been months since they had been in contact. According to a statement made by Garcia, two of the men were in desperate need of medical attention — they had been shot while fleeing Mexico and the bullets remained in their bodies.

Hoping to gain access to clients for asylum interviews and deportation proceedings, the ACLU filed the suit on behalf of Sanchez Gonzalez and Innovation Law Lab, an Oregon-based nonprofit organization dedicated to advancing the rights of immigrants and refugees. The Law Lab said it has sent at least five pro bono attorneys to the Sheridan detention center, who have repeatedly been denied permission to enter for prearranged meetings.

Although Sanchez Gonzalez is the only named detainee-plaintiff, ACLU attorneys have asked the judge to grant the same relief for all the migrants housed at the facility.

“Denying these men access to counsel — at a time that they need it most to prepare for interviews with immigration officials or appearing before an immigration judge — is as outrageous as it is unconstitutional,” dos Santos said. “For an asylum seeker, this could mean the difference between life and death.”

Although every person in the United States has a constitutional right to access to legal representation, since June 8, only one attorney has been able to meet with a client, according to court papers. “That meeting was a one-hour preliminary consultation. The client was subsequently transferred to the North West Detention Center in Tacoma, Washington,” the documents say.

This week, law enforcement officials informed Law Lab lawyers that they would not have access to detainees before next Tuesday. ICE indicated, however, that it could begin asylum interviews before then. If a detainee does not make a persuasive case in his interview, he could be deported.

“When Trump Administration policymakers decided, without notice, to use a federal prison for civil detention — a facility that is not intended or designed for civil detention — to force a rapid removal process through tiny slivers of access, our local choices and options shrank, and this clash of constitutional rights with the Trump policy was bound to happen,” Stephen Manning, executive director of Innovation Law Lab, said in a statement.

A hearing in the lawsuit is to be held Monday at 8 a.m.